Last summer I had a request from a government official to teach a BOINC class in Singapore. When I learned of a Grid-related conference there, I decided to kill two birds with one stone. Actually three, because Shawn Lum, whom I hadn't seen in 18 years, lives there.

Uneventful but horribly long flight from SF to Singapore via Tokyo. I arrive at 11:30 PM and take a taxi to the Hotel Rendezvous. It's muggy - 80ish and humid. It never gets any cooler. Fortunately for me, I enjoy this weather.

It takes me a few minutes to master my high-tech hotel room, in which everything is controlled from a central panel that doesn't work unless you put your card in a special slot.

I'm paying extra for an 'Executive Club' room, whose benefits include breakfast and happy hour in the top-floor lounge. There's a nice view of Singapore. A mile or so away are two buildings that look like enormous durians. This is the national theater complex, called the Esplanade. After breakfast I take a stroll in that direction, passing through a gigantic upscale multi-story shopping mall (the first of many). I scope out the Esplanade, which is a bust. There's a display of 3-D graffiti art, but the only activity is a Mother's Day event involving popular Chinese tunes, which I avoid like the avian flu.

On the way back I visit the mall's food court, and have my first-ever 'rice burger', which instead of a bun has a pair of sticky-rice patties. Not bad! 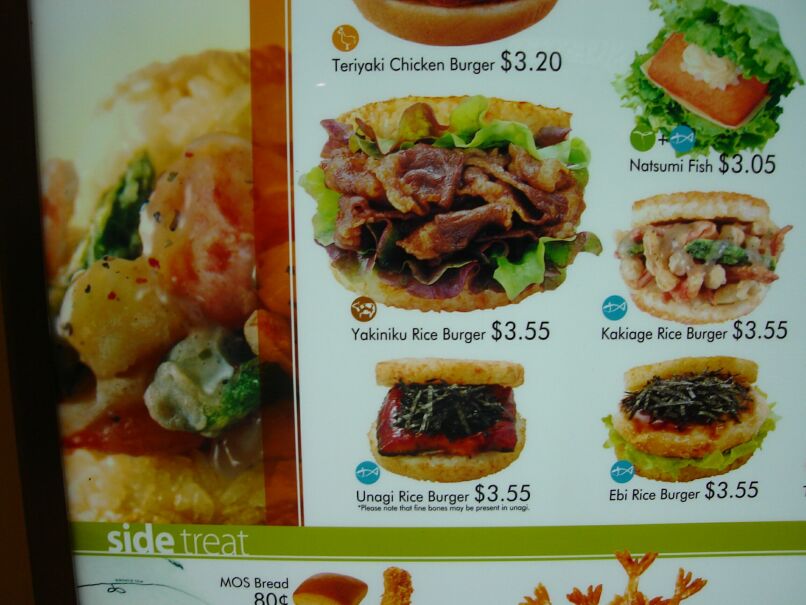 I had the Ebi
I pass by the 'Raffles Hotel', a sprawling example of British colonial architecture.

Some towns (like Adelaide) have a big central upscale mall, all air-conditioned and polished granite. In Singapore, there's such a mall every few blocks, each one more lavish than the last. Each mall has a food court, but there are also many open food courts on the street, and a number of gigantic covered open-air mega food courts, with hundreds of grimy stalls. The streets and the malls are aswarm with people late into the night.

So the entire island - it's not that big - is a nonstop frenzy of shopping and eating. It's not clear where the money comes from. The 'multinational corporation' aesthetic is pushing aside the 'dirty Chinese market' one. I with there were something in between.

Anyway, I make another excursion for dinner, enjoying some Nasi Goreng at a sidewalk Halal place (Singapore is mostly Chinese, with a sizeable Malay minority and some Indians).

I meet at 9 AM with my host Jon from the National Grid Office. We're at the ultra-modern Singapore Management University, site of the conference, across the street from the Rendezvous. We talk inconclusively about work, then have lunch at the modern air-conditioned food court across from the Rendezvous. Jon tells me that 80% of the housing in Singapore is government-controlled, and there's a social-engineering policy that encourages people to live close to their parents, by making the housing cheaper if they do.
click image for hi-res version 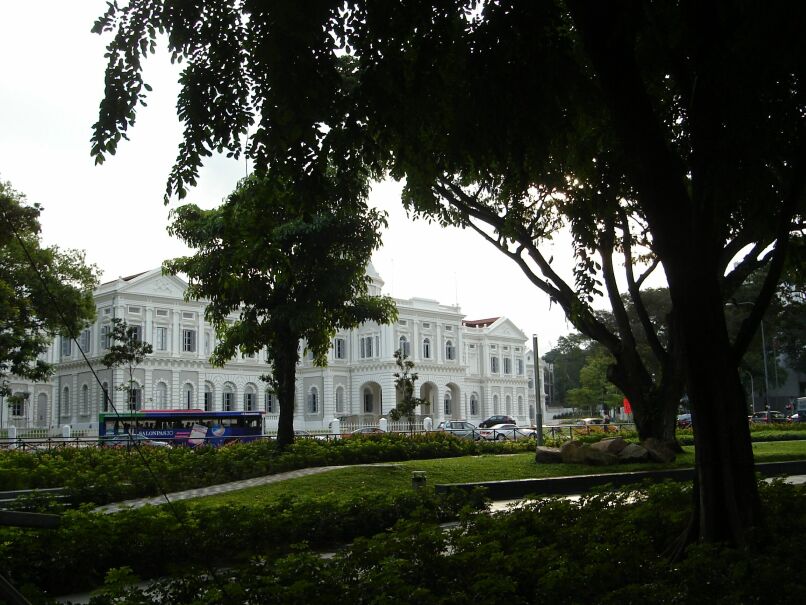 National Museum, across the street from SMU

At 2:30 I give a sparsely-attended talk at SMU, ostensibly for high school teachers and students.

That evening I give a talk (for the general public, but attended by computer geeks) at the incredibly opulent National Library. An Enthusiastic Wacko accosts me.

Afterwards I randomly walk to the Bulgis shopping mall, which is an outdoor simulated street. A stand features diverse Nightmare Before Christmas merchandise; I'm tempted but don't pull the trigger. A fountain with random jets captivates a group of screaming kids. 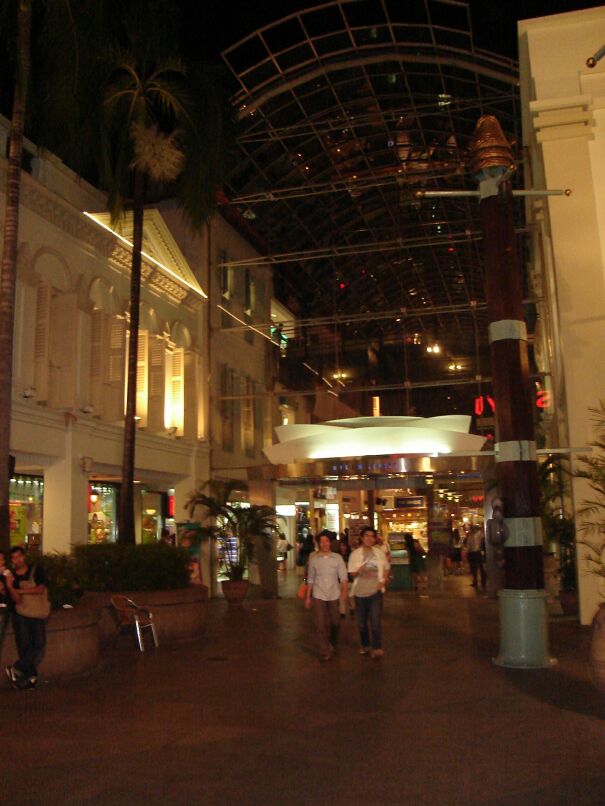 I give my all-day tutorial at SMU. One of the attendees (a recent hire of the Grid Office) is friendly; we have lunch, and after the tutorial (which ends early when I run out of material) takes me on a walk to Clarke Quay, a Riverwalk-type area, and the financial district. A sudden rainstorm (the only one during my stay, in spite of forecasts) drives us to shelter in an underground mosque. 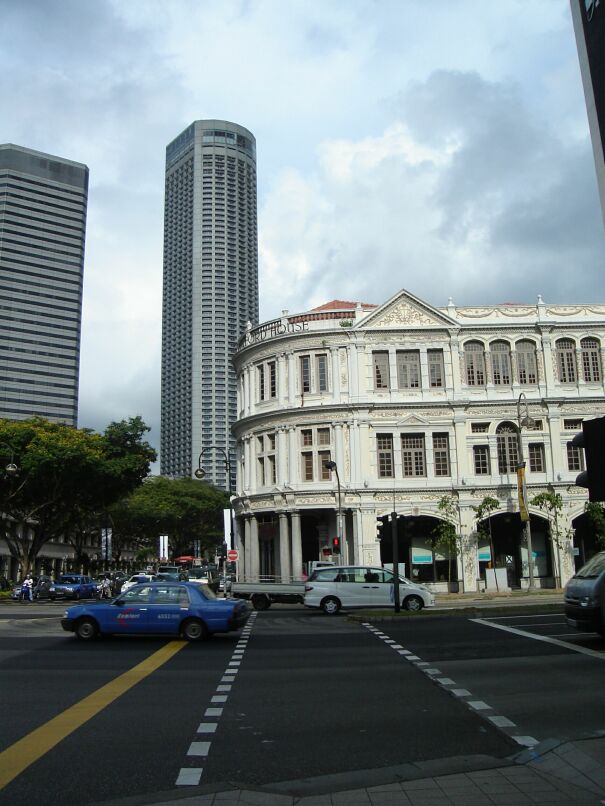 Bar where the Singapore Sling was invented 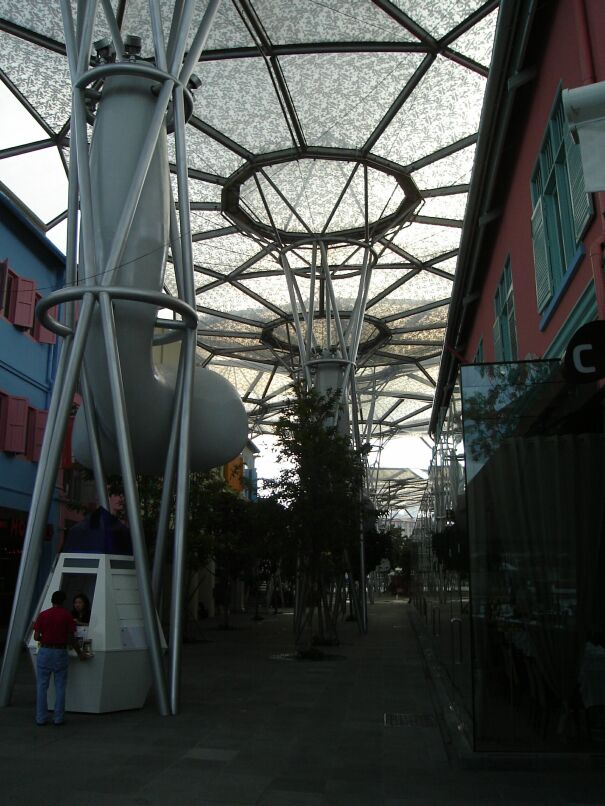 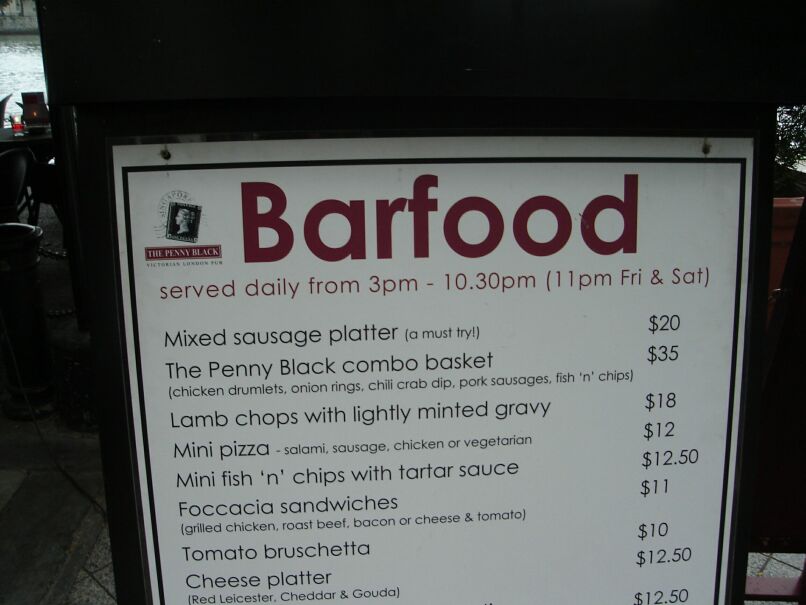 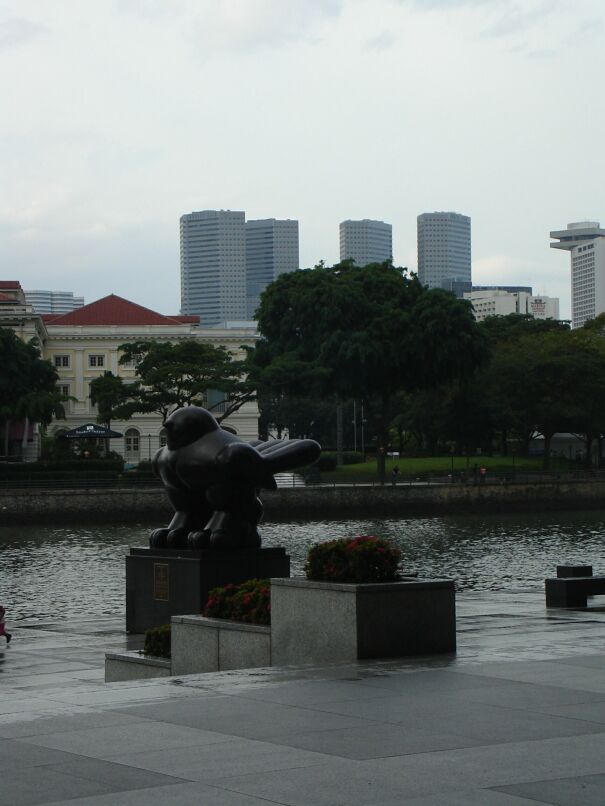 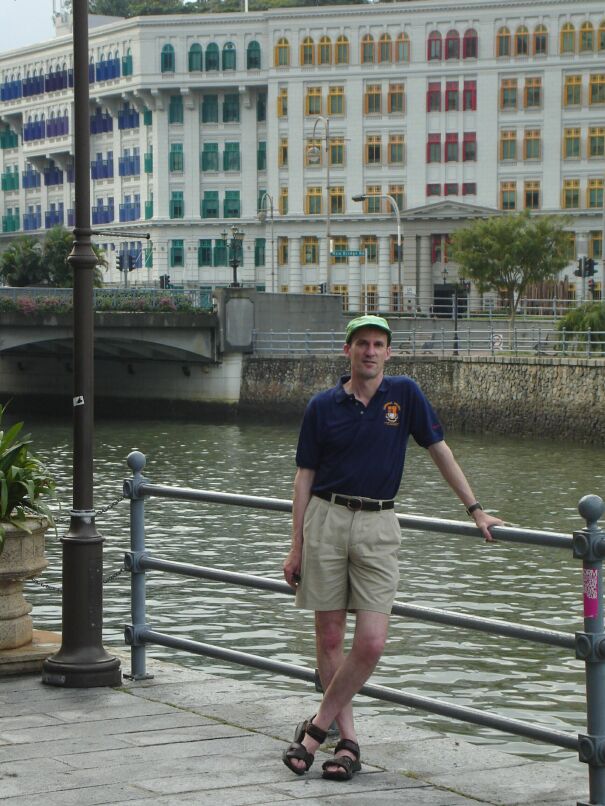 The evening there's a reception for the conference. I talk with a serious young man from Adelaide, and later am introduced to the head of the Grid Office, who's the former admiral of the Singapore navy. He describes plans for an early-warning system for avian flu, using airborne material detectors at major shopping malls, connected up to massively distributed Grid processing. The results would be kept secret, of course, so that mall business would not be negatively impacted.

I attend a session at the conference, which turns out to be a bust (they always do). I give my talk. The other 3 speakers in the session are AWOL. We sit around while one of them is tracked down. People wander off.

That evening I set out for 'Climbadventure', one of Singapore's climbing gyms. It's a lengthy walk through Chinatown, and a Hindu temple with attached shopping bazaar. 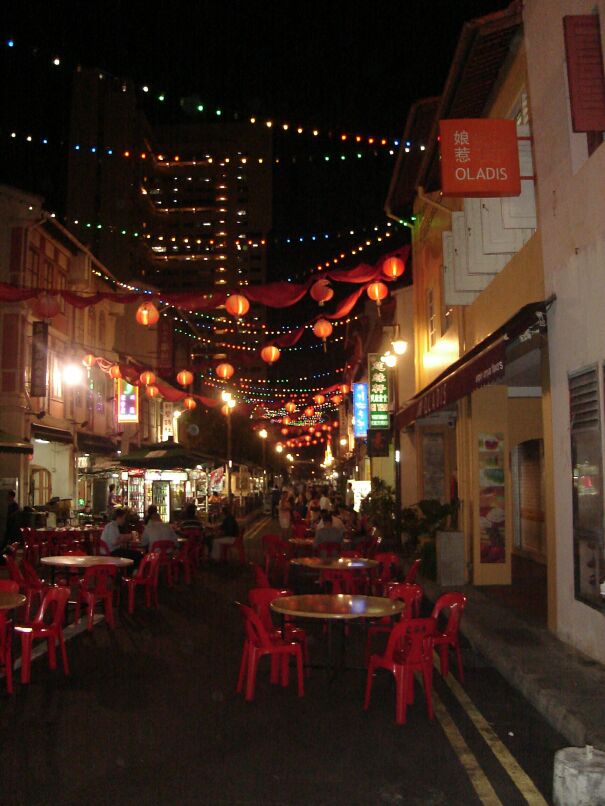 The gym is a bust; they don't have shoes big enough for me, and I can't find a belay partner. The walls are rectilinear plywood, mostly vertical. The holds are diverse and modern, however.

On the way back I get tired and take the subway. The subway system is glossy and modern, like the shopping malls. The closest station to my hotel is 'Doby Ghaut', which turns out to actually be a Giga-scale shopping mall. It's quite difficult to figure out how to get out, kind of like a Las Vegas casino. I struggle with claustrophobia and a burgeoning hatred of Singaporean consumerism.

I give the conference another chance, with predictable results. I have lunch with Gilles and Derrick, then meet a reporter and photographer from the local newspaper. At 2 PM I meet Shawn, and we drive through the suburbs to the Bukit Timah Nature Reserve, where Shawn does some work and knows everyone (and every tree). It's a total delight, and it's also great to reconnect with Shawn. We see numerous monkeys (some of whom have learned to get food by lunging menacingly at schoolchildren, causing them to drop their lunchbags). 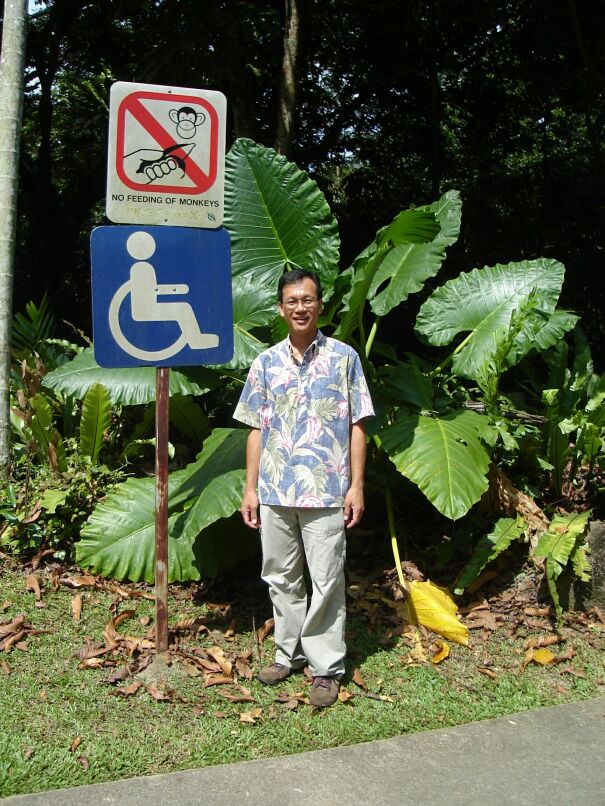 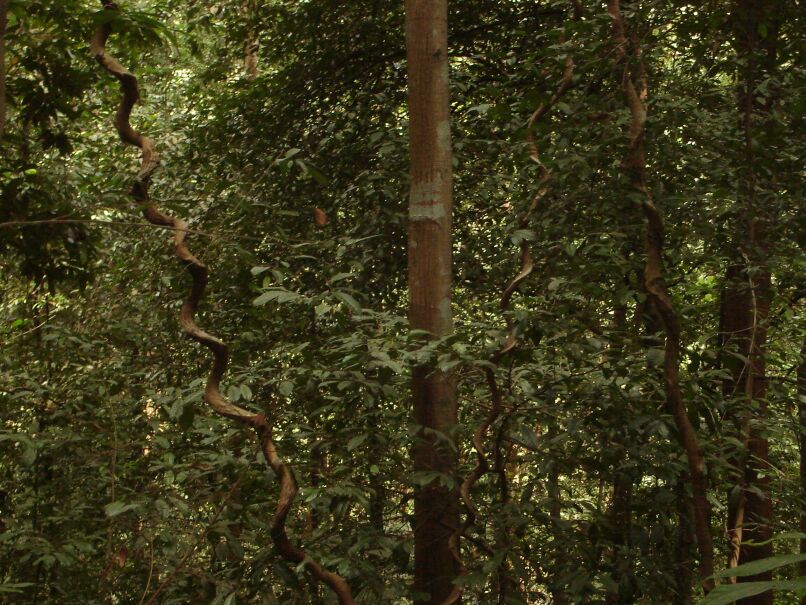 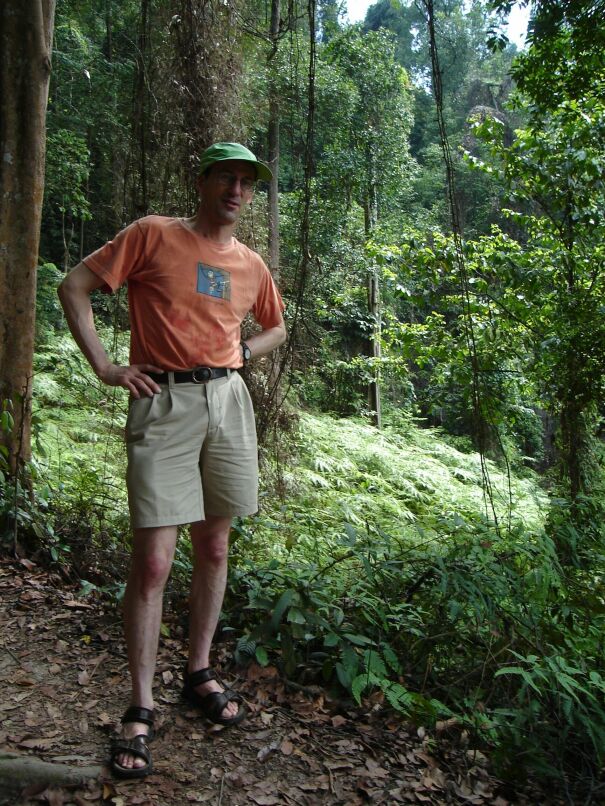 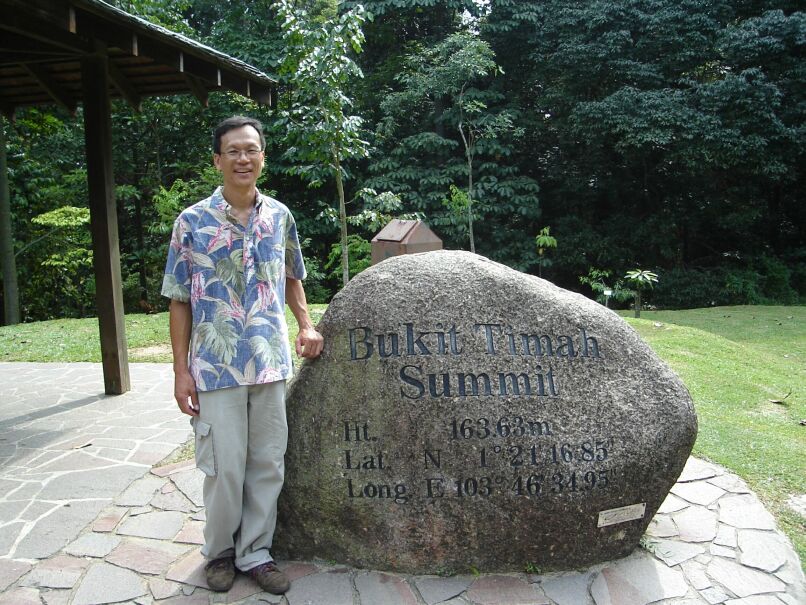 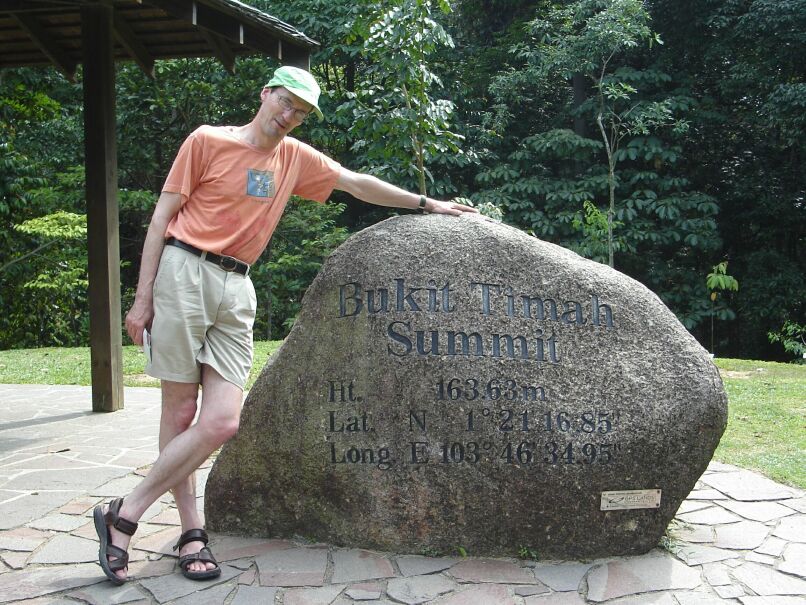 Me at the summit

We walk to the highest point in Singapore (not all that high). We jump a fence and take an overgrown path to the rim of a very large quarry (part of the preserve is a granite outcrop).

Shawn treats me to a sugarcane juice and limeade at a nearby open-air food court, and fills me in on the political and historical situation of Singapore.

That evening I decide to see Night Safari, a dimly-lit zoo of nocturnal animals and birds. This involves a long subway ride and a long bus ride. The attraction (part of the Singapore Zoo) is OK but way too touristy. I dish out $28 for admission plus tram. In spite of repeated exhortations, many of the tourists can't figure out how to turn off the flash on their friggin' cameras. I get off at the halfway point and walk. The high point is a pool full of huge pink hippos.

I hook up with Gilles and Derrick, and after a research strategy session, we go on a long walk, through a 'Dumpling Festival' and some fruit stands where Derrick buys some fresh lichis. We have lunch, then set out for Little India. It's overwhelmingly hot - about 100. We pass through a neighborhood of analog electronics, car parts, and used appliances. The main drag is disappointing, but very Indian. 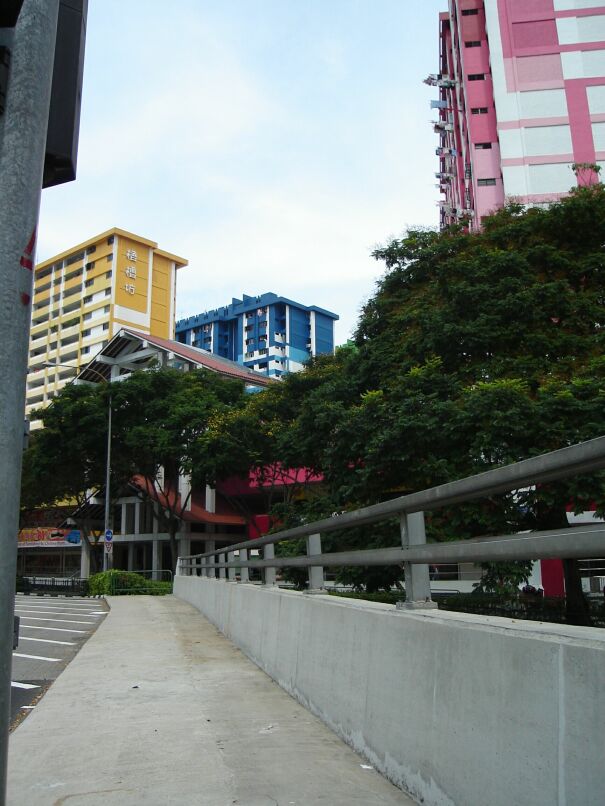 That evening I go with Shawn and his girlfriend Eve for dinner. We go to a hybrid Malay/Chinese place that they know, in an interesting neighborhood that has lots of temples and also lots of brothels. Eve is a delightful woman and we talk about many things. It's with considerable reluctance that I return to my hotel and prepare for the early-morning flight home. 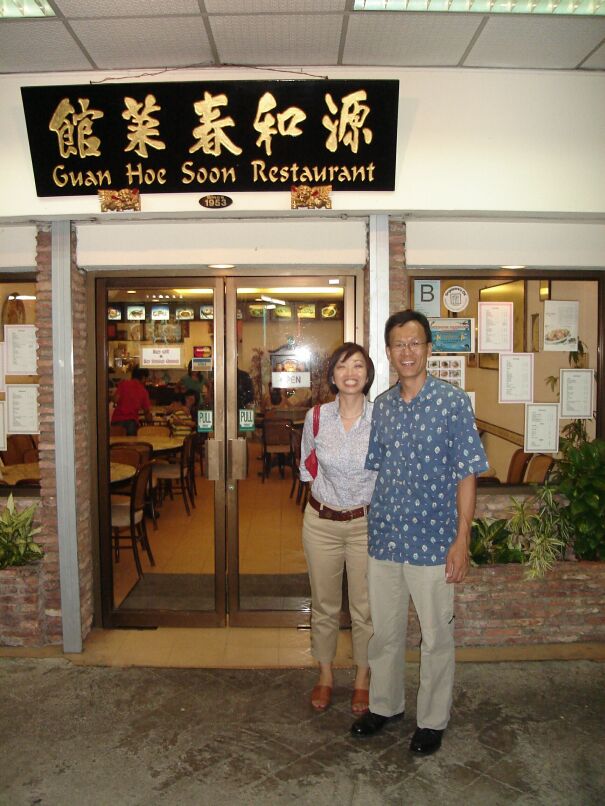 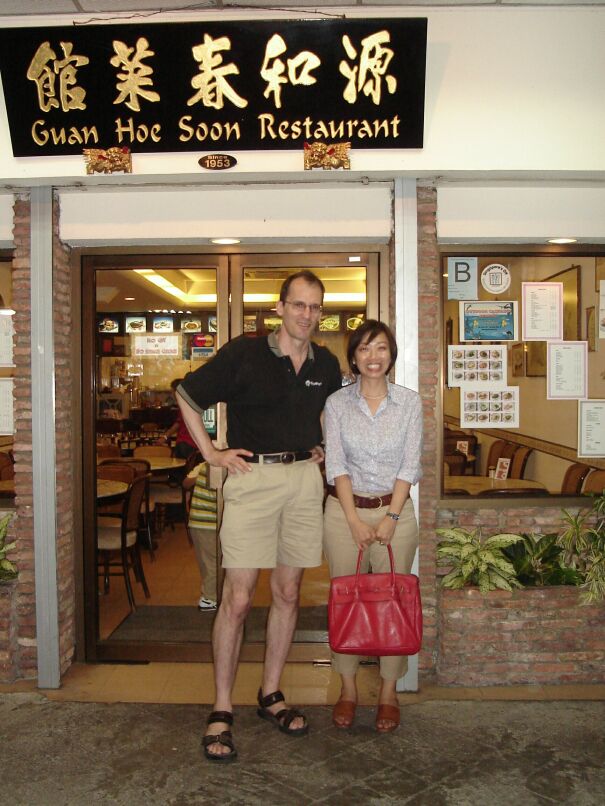