I want to take Noah to the snow. Last year's trip was OK, but I think that having another kid along might help, so we invite Noah's friend Alex.

I pick up Alex and we drive on I-80 to Colfax, arriving around 1 PM. We hike the first mile or two of the Stevens Canyon Trail, which is very nice; it's a cool sunny day. 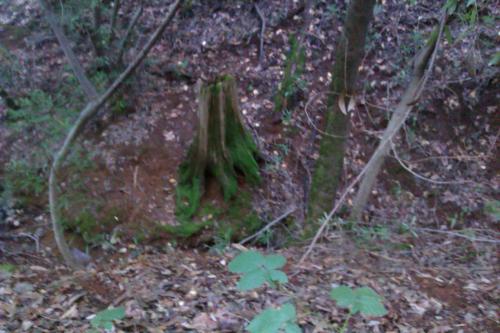 Alex was taken by this stump

I had reserved a motel room in Colfax, but the motel has no record of my reservation. The young Indian woman says they have a room with enough beds. However it's $75 instead of $54. I'm confused, but accept it.

I go to the room, open up my laptop, and look at the confirmation email. It's from 'Colfax Inn and Suites', not 'Colfax Motor Lodge'. I go to the office and apologize to the woman, explaining my error. Even more confusing: she says there's no other motel in Colfax.

I return to the room, take a closer look at the email, and realize I booked a room in Colfax LA, not Colfax CA. It's too late to cancel. Somewhere in the bayou a room sits empty, and an elderly man wonders when Mr. Anderson will arrive. I tell Noah this is my 'Louisiana Purchase'. He laughs riotously. Nine is an ideal age: old enough to get your jokes, young enough to think they're funny.

At 7 PM we go in search of dinner. Colfax has a 1-block Gold Rush-era Olde Towne, which somehow I've never visited before. We go to the Main St. Pizzeria there. Alex will accept only cheese pizza, but that's OK. I have a pint of local IPA, and Noah has more football on TV. Everyone's happy.

Back at the motel, Noah has a meltdown because I won't let him watch the last 2 minutes of the already-decided football game; Alex is acting bored, and is not interested in football.

Eventually I get everyone to bed. The kids manage to share a double bed without any horseplay or bickering. I'm reasonably comfortable but still have another zero-sleep night.

The next morning we need to be at Boreal, one hour away, at 9 AM. I struggle to get the kids organized and out the door. They do random things like start card games. Alex has a meltdown because his coat is missing and he refuses to wear Noah's extra one (the coat later turns up in the car).

We to to the MacDonald's across the street for breakfast; it's was the only option. Alex refuses to eat anything except the 'Parfait' (some corn-syrup-based concoction; 'Yogurt' does not appear in the title). I refuse to get this for him, offering him anything else instead. Another meltdown ensues. Noah and I munch on our Egg Bacon Cheese Biscuits - yuck.

In the car, it dawns on my that we have 2 pieces of leftover cheese pizza, which I offer to Alex. He accepts, but it's frozen solid. I turn up the heat and for about 15 min drive while holding a piece of pizza up to a heating vent, first one side and then the other. Eventually it's thawed enough for Alex to eat.

We arrive at Boreal. The process of registering for the lesson and getting skis is chaotic. It's hard to imagine that they do this day after day but don't optimize the process.

When the lesson is underway, I return to the car, put on hiking books, get my snowshoes, and head for the Castle Peak trailhead on the other side of the highway. At the entrance to the parking lot an employee accosts me (they don't want hikers freeloading in their parking lot). I tell him I have 2 kids in lessons for $149 each.

I have a pleasant snowshoe, but my sleep deprivation catches up with me, I feel very tired, and I turn around after an hour, before getting to the steep part. 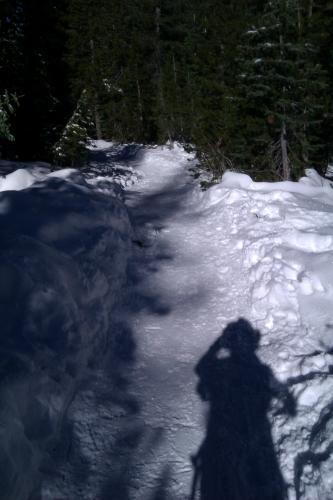 This pictures are all crappy; sorry 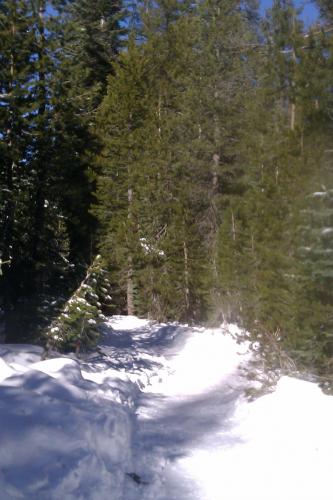 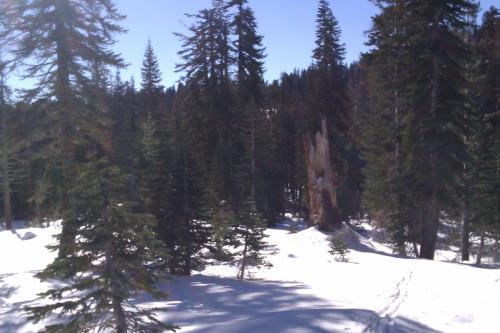 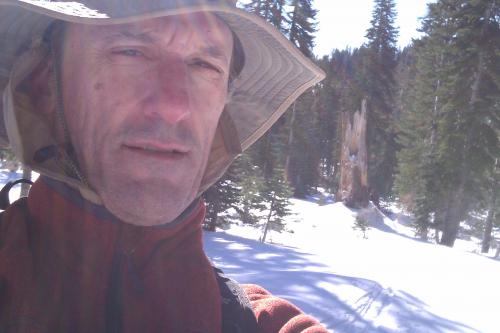 I return to the lodge, have an 8-oz beer, and wait for the kids. They're cold and tired. Alex is a little whiny, especially after a woman steps on his foot with the sharp toe of her ski boot. But they recover and we have a pleasant and traffic-free ride home, with a stop at In-and-Out Burger in Auburn.

I'm always struck by the way Americans flock like lemmings to activities that are not that great (e.g. Disneyland, downhill skiing) and pay through the nose for them. Here's a rant I wrote in an email earlier today about this instance of this:

Today is a striking example of the Insanity of America.

Boreal is a madhouse. Thousands of skiers swarm the place, their SUVs overflowing the parking lot. There are hour-long lines for everything, from renting skis to getting an overpriced cheeseburger. Families sit around tables piled high with possessions, their glazed-eyed teenagers mumbling skateboard jargon. Outside, carbon-spewing chairlifts tote the pasty asses to the top of a prostituted, denuded mountain, as its ageless spirit recoils in horror from the spectacle.

Across the highway, a few hundred yards away, a lone hiker (me) puts on snowshoes and walks up into the hills toward Castle Peak, through a magical snow-carpeted land of meadows and pine forests. The only sounds are the crunch of the snow underfoot, the rustling of the wind in the trees, and every so often the gurgle of a stream flowing under the snow. The hiker follows ski tracks for a while, then leaves the trail and walks across snow marked only by rabbit tracks to a fallen tree bathed in sunlight. He clears the snow from its trunk and sits for a good long while. The beauty, solitude, and serenity still his mind, then lead it in lofty and spiritual directions, pondering the deepest issues of his own life and his place in the natural world around him.