An astronomy project I'm potentially involved with is having a 2-day workshop at UC San Diego. I decide to drive down there, taking my bike in the back of the car, and see a couple of friends on the way.

I drive ~5 hours to my friend Michal's place in Springville (see car notes below).

We do a ~10 mile bike ride up the canyon on hwy 190. Michal has an electric bike, I don't. I labor somewhat because of the 100-degree heat. (I forgot my GPS watch, so none of the activities appear on Strava.) We go for a dip and cook burgers outside. I assemble the stand for Michal's Korg electric keyboard.

We get up around 7 and do a medium hike (1,500' vertical) on the hill behind Michal's house. It's already hot; I sweat. We have coffee at a groovy place in town and talk about families.

I drive to San Diego. There's a big traffic jam getting on 99, then a huge jam on I-5 going through LA, which stretches on for miles. My nav devices (see below) send me on surface streets several times, but this is high-stress driving and there's a lot of time overhead getting on and off, so eventually I ignore them and stay on I-5. The traffic thins out around San Clemente.

My impression is that the car-based transportation system in LA is hopelessly broken. Too many people, too many cars. Thank God I don't live there.

I arrive in La Jolla and check in to the Sheraton. I meet Dan, Ryan and others for dinner at a nearby Vietnamese place in a strip mall, which it turns out is the 1985 birthplace of Qualcomm.

I drive with Ryan to the UCSD faculty club, where the meeting is. Afterward we go to Shelley's lab in the astro building and see a telescope prototype. 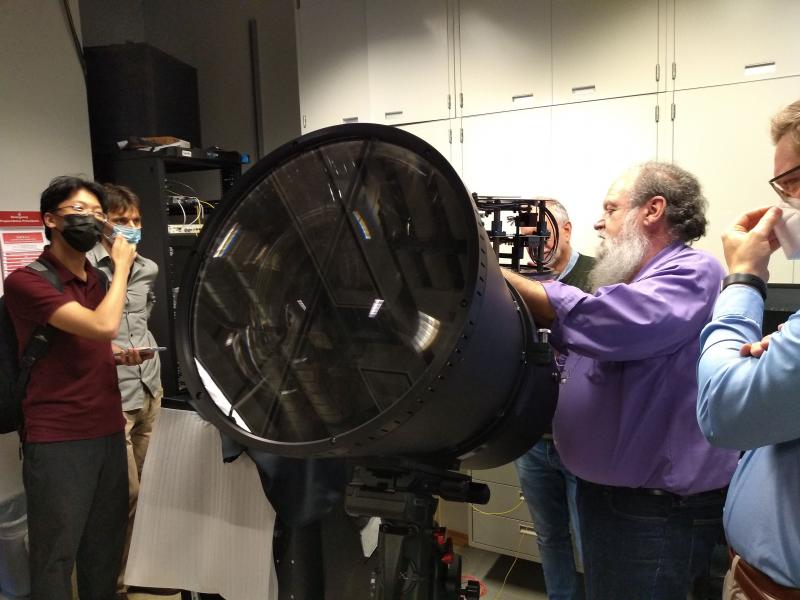 The final version will have 80 of these in a geodesic dome at Mt. Palomar

Ryan and I fiddle around putting Linux on a PC. We all go to dinner at a semi-fancy diet-conscious place in an upscale mall. I chat about Brutalism with the architect who's designing the dome at Mt. Palomar.

At around 9 PM I get on my bike and attempt to ride to downtown La Jolla, which is near the coast. But the streets are like highways, packed with speeding cars, and no bike lanes or other provisions for pedestrians or bikes. I give up after a mile or so. I hate SoCal.

I give my talk; the workshop winds up around 3. I drive to the Garey Motel in Pomona. Google sends me on I-5; I'm very leery of this and consider I-15 instead, but I go with the flow and it turns out OK; I go east before reaching LA proper, and up hwy 71.

The Garey Motel is expensive ($180) but is a threadbare dump. At least the WiFi works. I study the map and locate a mountain bike trail on an undeveloped hill. There's a No Parking sign so I park in a nearby strip mall. The ride is great - short but steep. 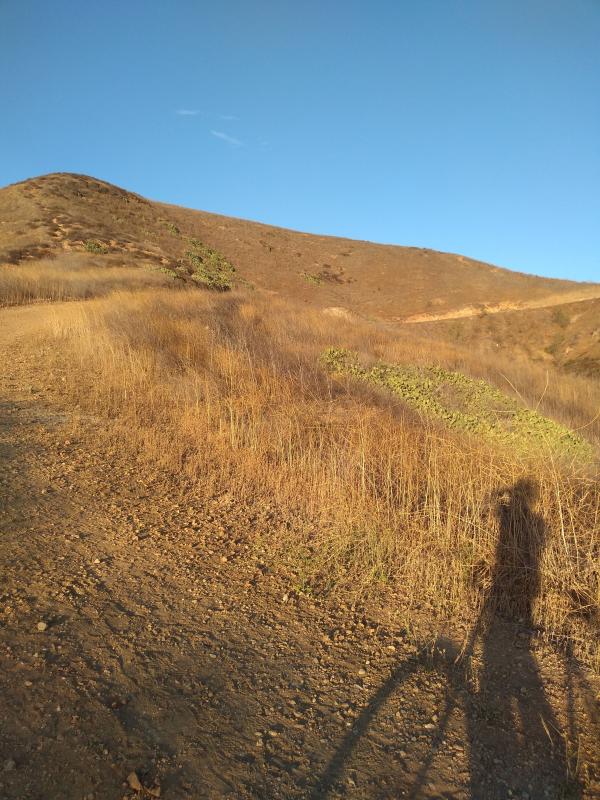 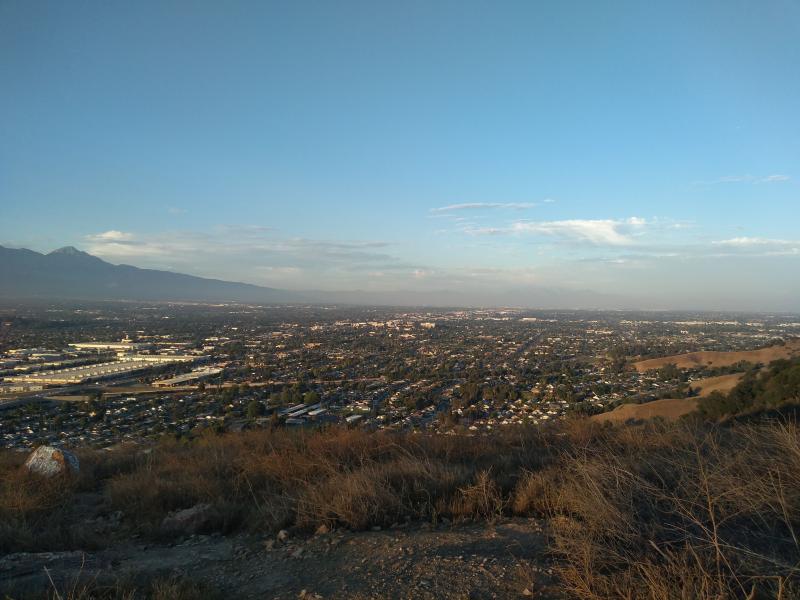 The nav device sends me on some freeways to get to a grocery store. I get some dinner, a beer, and food for tomorrow.

After a night of fitful sleep, I get up around 6 AM, shower, and get some grease-soaked food at MacDonald's. Seth arrives at 7 on the dot. I leave the large coffee on the roof of the car, and it tips over and spills as I start driving.

The town of Mt. Baldy is mobbed with cars; some kind of event is going on, possibly a bike race. We get to Manker Flats at 7:50. The parking lot is also pretty full and we have to park at the very bottom. 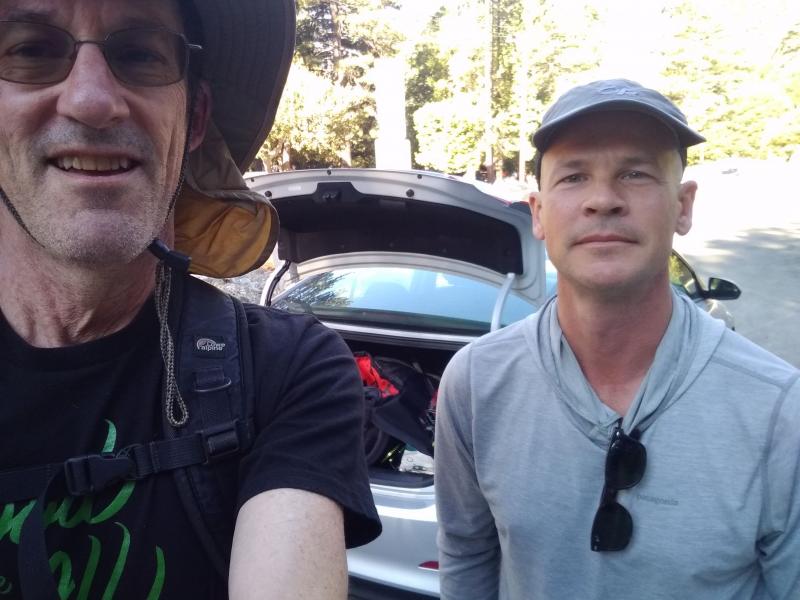 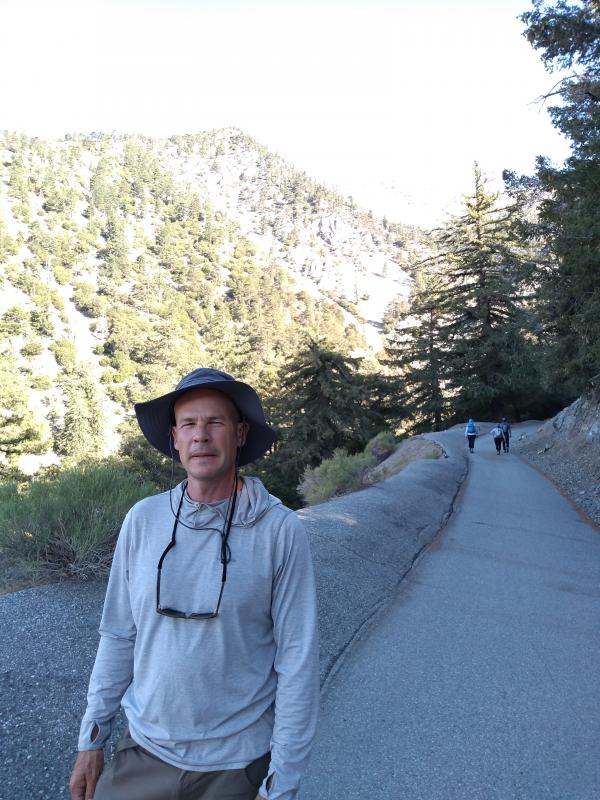 Right after this, Seth realized he didn't have his phone

We take the usual secret trail: direct and steep. Seth very kindly lets me set the pace the entire way. It's around 70 - warm in the sun. I tell Seth about Mt. St. Helens, and he tells me about a new friend. 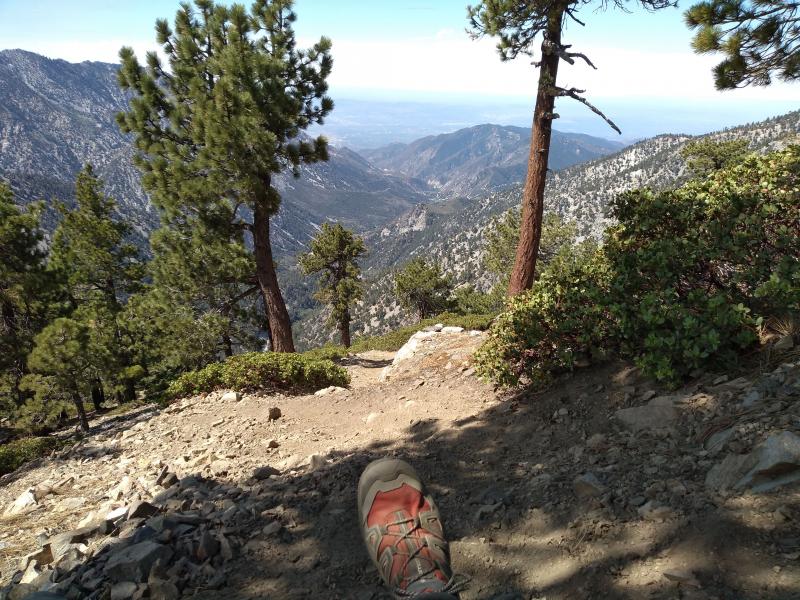 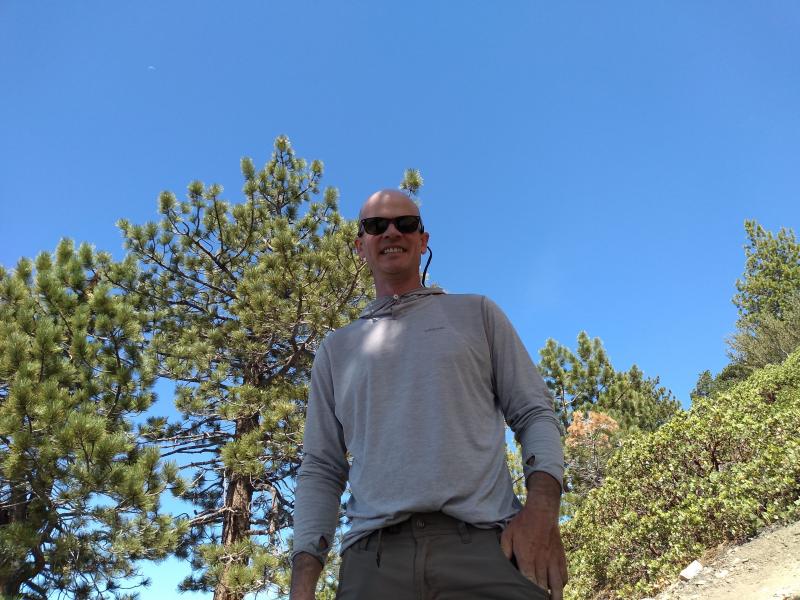 After gaining about 2,500' the trail meets the Devil's Backbone trail coming from the ski lift, and there's a traverse to the final climb. The total elevation gain is 4,000'. 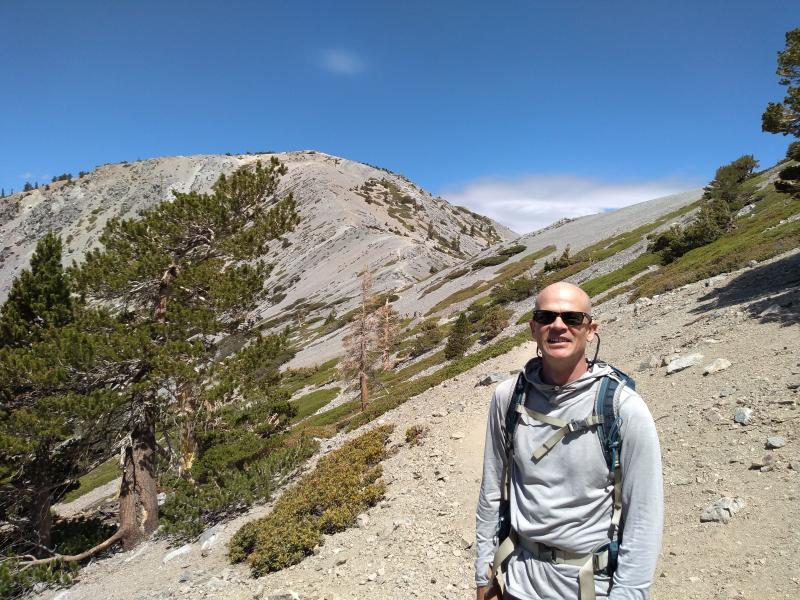 Traverse to the summit 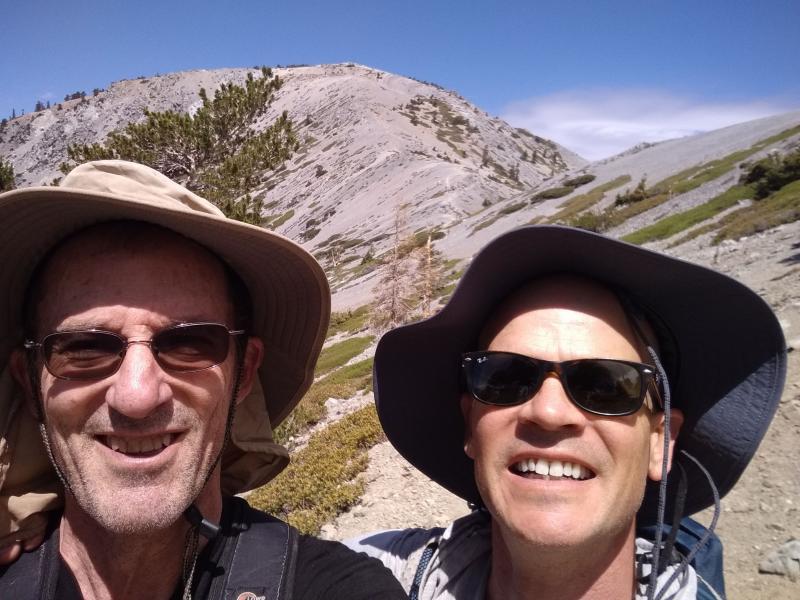 Seth must use tooth whitener

We both feel absolutely great, time flies, and we're on the summit at noon. There are lots of people there. Most of them came up via the chairlift and Devil's Backbone; i.e., they cheated. 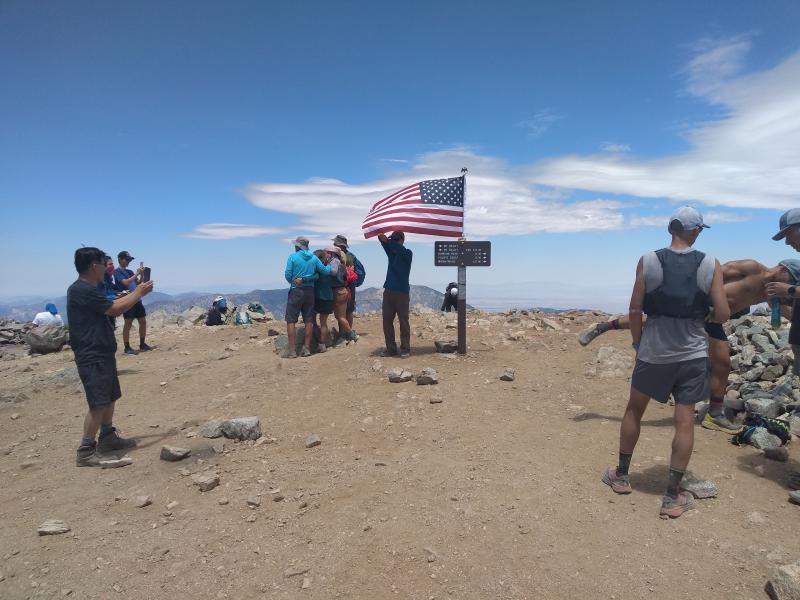 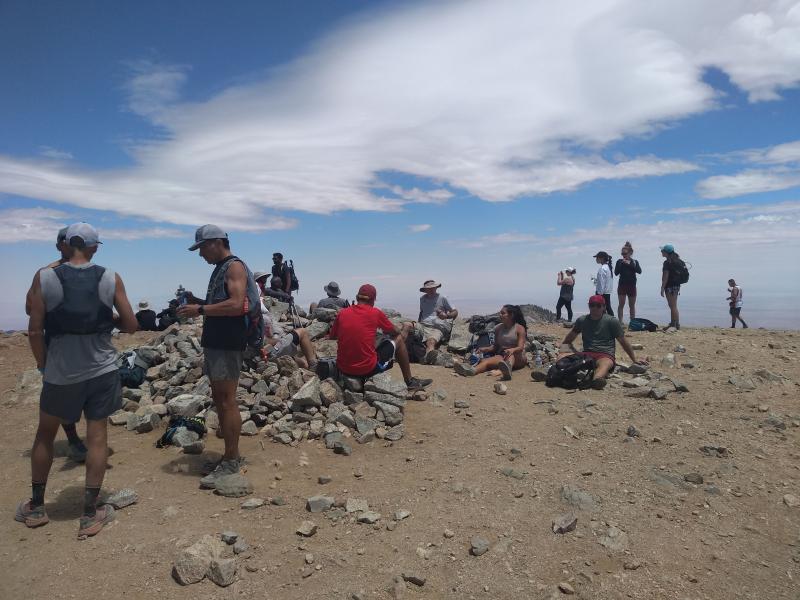 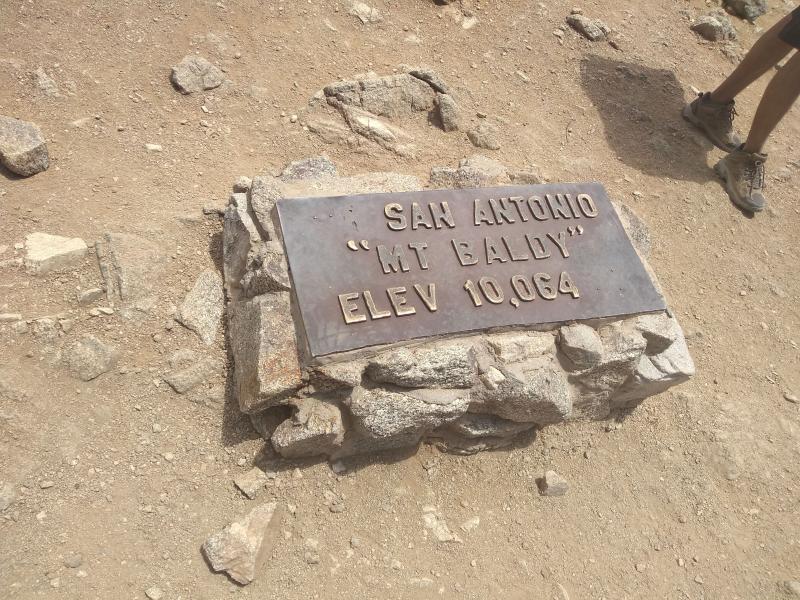 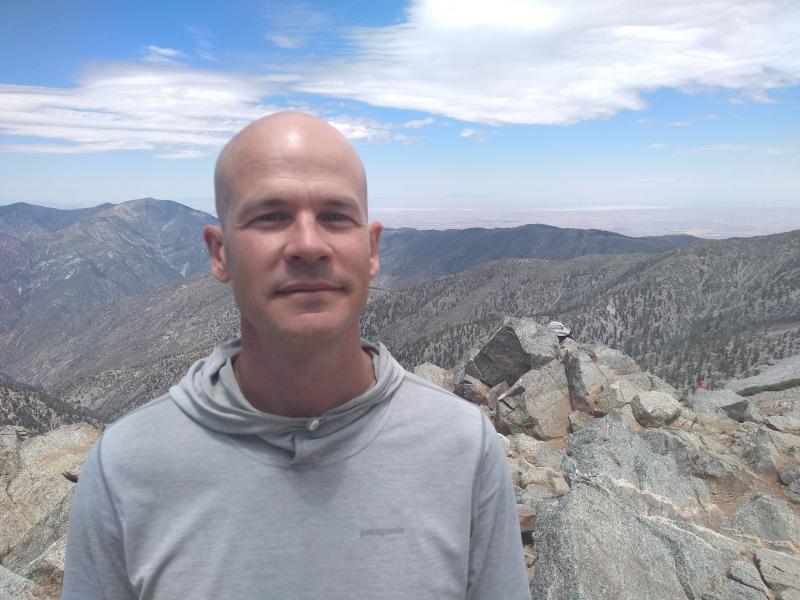 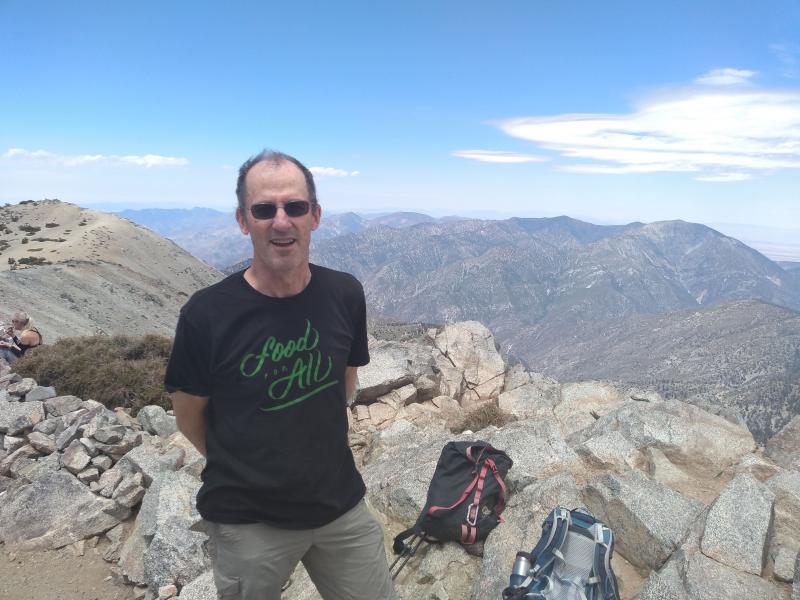 We start down at 12:30. Seth tells me about his climb of Mt. Fuji. I tell him about the sexy rock/scissors/paper video game in Tokyo. 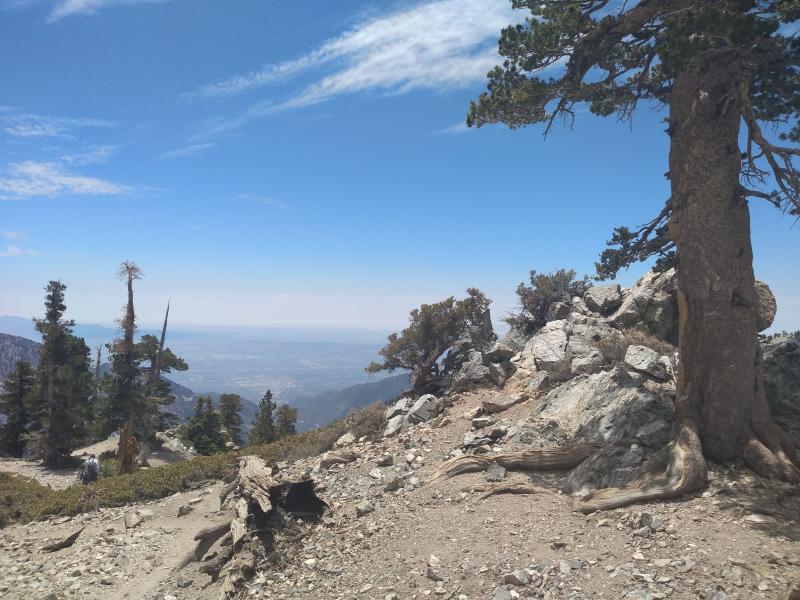 On the way down we stop at the ski hut, which is closed. 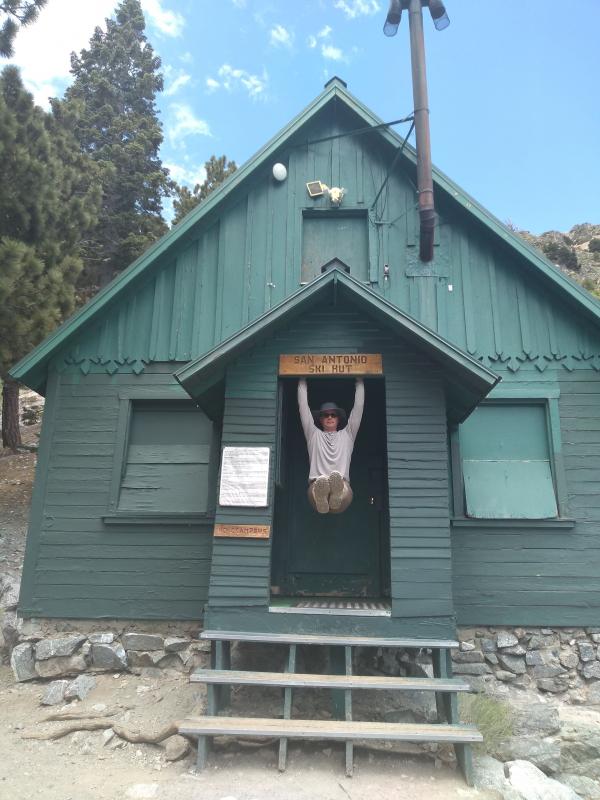 Seth shows off his pike position 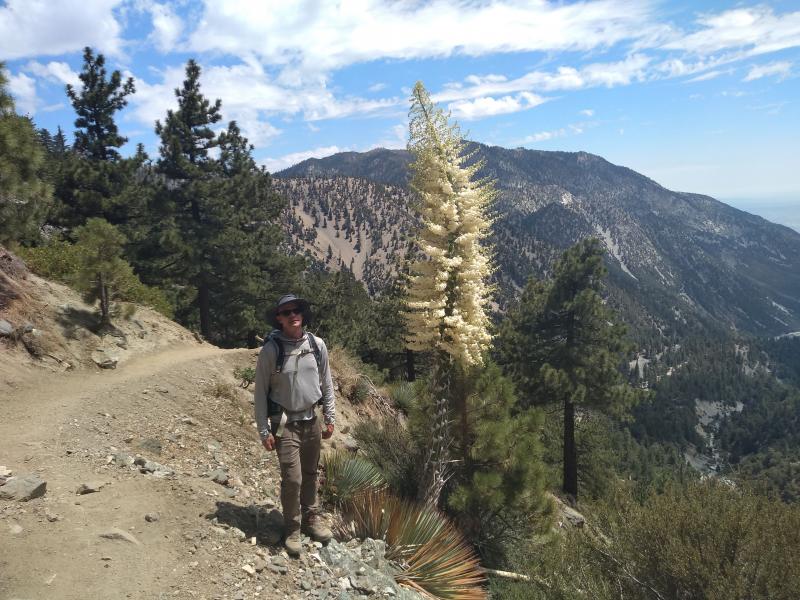 We're at the cars at 3:00. We stop at Mt Baldy Lodge; I get a lemonade, Seth (who's driving to Bishop afterward, and doing another climb the next day) gets an IPA. I ask after Missy, but she's not there.

I drive back to Berkeley. Google sends me on 210 to I-5; there's no traffic the whole way and it takes around 6 hours. I stop for some coffee. There's a wonderful and very long sunset; scattered flat clouds with curved tails below, maybe rain evaporating high in the air.

I decide to take Erica's car - a 2019 Subaru Impreza - rather than my 2009 Hyundai Elantra. It turns out that the Subaru has a couple of features that I really like.

First, it has 'intelligent cruise control': if you come up behind a slower car, it slows down and maintains a safe distance. If the car in front slams on its brakes, it slams on the brakes. If a car going faster than you cuts in front of you, it figures this out and doesn't slow down.

The net result is that you don't have to think about braking and accelerating, even in traffic jams. Your feet don't need to touch the pedals - all you have to do is steer. This vastly reduces the stress of freeway driving.

But there's a downside: you get used to feeling like you don't have to brake, no matter what happens in front of you. This can carry over to times when you're NOT using cruise control.

Also, the system senses only the car in front of you; it can't, for example, see that there's a bunch of brake lights beyond that. So there are situations where it has to make rapid stops, and it generally uses the brakes more than I would.

The car has a couple of other sensing features. It beeps if you're starting to drift out of your lane. It has lights on the side mirrors that go on if there's something in your blind spot.

I like all these features, and the next time I buy a car I'll require them. But they do lull you into a false sense of security and invulnerability. At one point a semi truck started to veer into my lane. None of the safety features warned me of this, and it took me longer than normal to notice it myself.

The Subaru has a built-in nav device: a Tom-Tom. I also have Google Maps on my Android phone.

The two devices disagree a lot. Google Maps seems to make better nav decisions; I think it has better real-time traffic info. But using the phone has a problem: for some reason, after giving an initial command via voice, it goes silent, and you have to look at the screen. I don't have a phone holder, so this means holding the phone in my right hand, and periodically looking at it, while using my left hand to steer and use the turn signal.

In complex places - like driving through LA - I wanted to get instructions from both devices, and pick the one that seemed best. This led to an absurd situation where I was holding a phone, looking at two screens, hearing voice commands, and trying to drive, all at once. Sensory and mental overload; exhausting.

The Subaru has an Apps button, and this leads to a screen with a (disabled) Android Auto icon. I figured this would be a way for stuff on my phone (like Google Maps) to appear on the car screen. And indeed it was; I installed the app on my phone, and it worked like a charm. Google Maps issued voice commands through the car speaker, and you even see text message notifications. The only downside is that you have to run the app anew each time you start the car.

The trip involved a lot of driving, but after a year of COVID confinement I didn't mind much. And it was great to see Michal and Seth.

Mt. Baldy is a sizeable hike - 4,000' vertical, 11 miles or so - but it felt pretty easy, and after a 6-hour car ride I feel normal, or maybe even better; my legs have a slight bounce. My body isn't failing yet - woo hoo!