I was invited by Prof. Francisco (Paco) Fernandez de Vega to give talks at the University of Extremadura in Merida and at the Hispalinux conference in Caceres the next day. Extremadura has a forward-looking regional government. They have embraced open-source software. All government-owned computers must run Linux, and all official documents are in OpenDoc format. Several government agencies (in Extremadura and elsewhere in Spain) are using BOINC for both grid and volunteer computing.

The trip means that Erica will have to take care of Noah solo for 6 days. Noah has had a stomach virus for several days, vomiting unpredictably. Unfortunately, Erica comes down with it too, and worse than Noah; she's pretty much incapacitated with nausea and dizziness. There are some discussions of canceling the trip, but we decide to go ahead with it.

I fly out of SFO at 6:45 PM, transfer in Frankfurt, and get into Madrid at 7:20 PM the next day. I'm staying at the High Tech Aeropuerto Hotel, adjacent to the airport (note to self: don't stay there again). They have a shuttle bus; the web site says to call them on arrival, but doesn't give a number. I'm able to get the number at an info desk, and fortunately I have coins for a phone call. They say it will be there right away. By now it's 8:00.

After 30 minutes of standing in the cold, it's still not there. I go back in the airport and try to get money for a taxi from the ATM, but it's broken. I call the hotel again, trying to convey the gravity of the situation. Finally the shuttle comes.

The High Tech has four stars, perhaps because it has glass-walled bathrooms and a very expensive restaurant. The basic amenities aren't that great - the bed is hard and the walls are so thin that a snorer in the next room wakes me up for good at 3:30 AM.

Again, there's a hefty wait for the shuttle, but after that my acquisition of a rental car goes very smoothly. It's a Renault Clio. I get the optional GPS system, which is an absolute god-send as I traverse the maze of freeways leaving Madrid.

The drive to Merida is pleasant but unspectacular. The scenery is an arid rolling plain with some mountains in the distance.

I spend a lot of time trying to find something acceptable on the radio. The commercial stations are the same pap/crap as everywhere. Fortunately I locate Radio Nacional Espana, which has both an excellent classical station and a world/new music station.

As I near Merida the plains are dominated by large trees that turn out to be oak; pigs eat their acorns, producing a local ham with a special flavor.

I get to Merida and locate the Tryp Medea hotel at 1:45. Paco and Daniel (his PhD student) are waiting there. We have lunch at a place that specializes in big piles of grilled meat.

We drive to Alanges, a group of steep rocky hills near the head of a gigantic reservoir. There is rock climbing here, but we don't see any climbers. We drive around to the far side of the hill, where there's a small village (Alanges) and a path leading up to some medieval castle ruins on the hilltop. Of course I go off the trail and clamber up some rocks, and Paco and Daniel follow for a little but then decide I'm crazy and return to the trail. 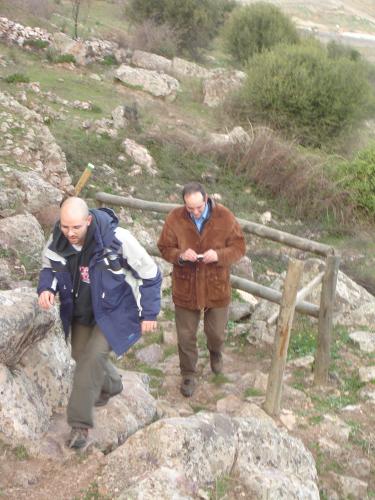 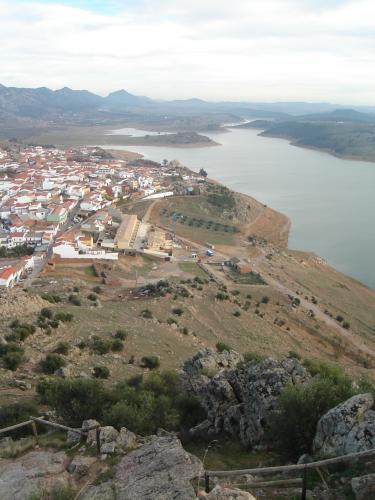 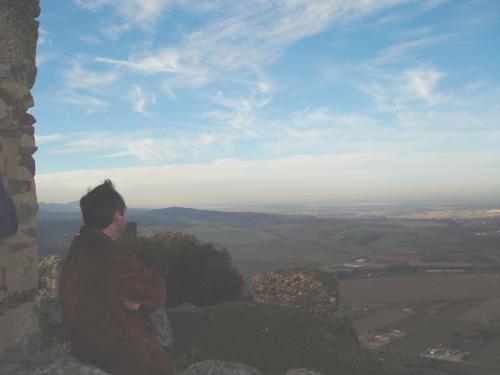 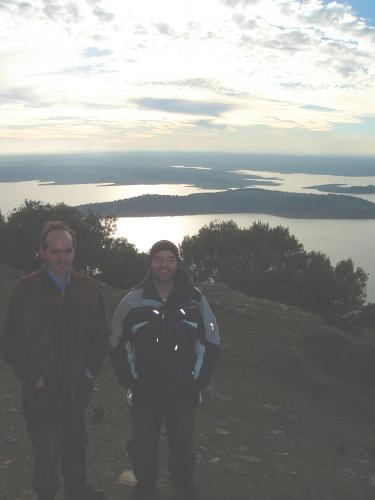 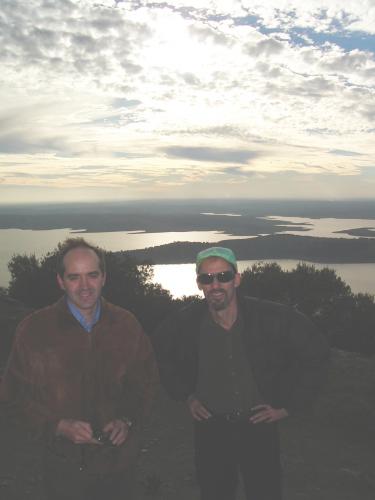 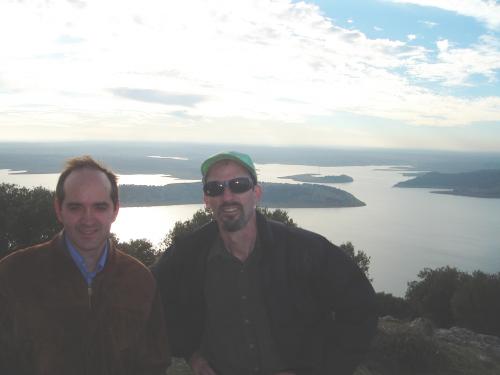 We drive through Alanges to a 5-star hotel (Aqualanges) next to some ancient Roman baths. The place is pretty much deserted, but Paco finds an attendant who's happy to give us a tour of the baths. The main attraction is a pair of pools in large (30') underground domes, with small windows at the top. These are original - 2,000+ years old, and still operational. The domes are incredibly reverberant.

We've come in two cars, so that Paco can continue to the village (Alemandralejo) where he lives. I drop off Daniel back in town, then park near the river and walk around the old part of the city, enjoying a beautiful dusk. 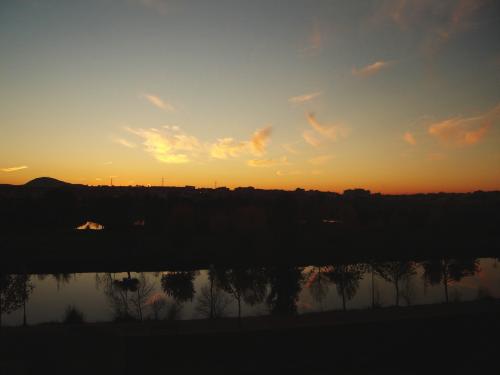 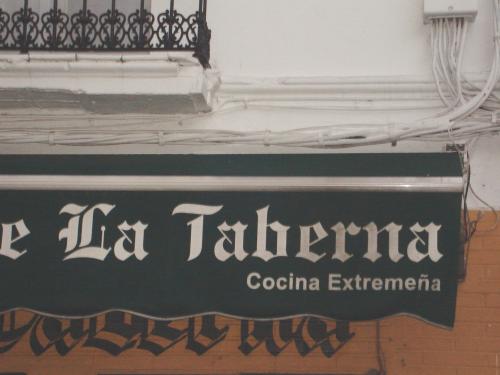 In the USA, "Extreme" is a marketing buzzword designed to attract young male skateboarders 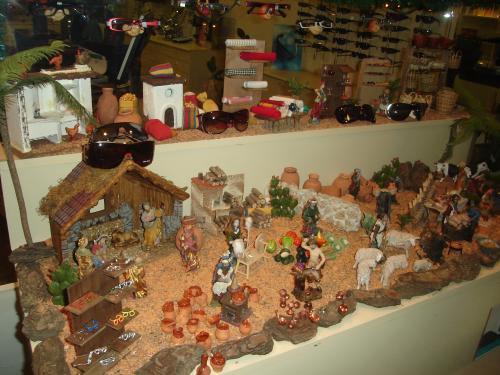 The construction of elaborate nativity scenes is a local tradition 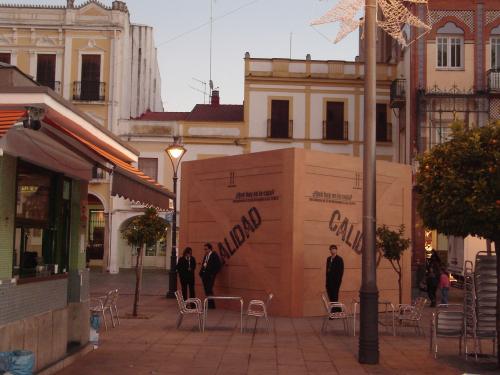 A Spanish marketing gimmick: a giant box, surrounded by "security guards", whose contents will be revealed on a particular day

I like Merida - it's a bustling, working-class Spanish city, with a lot of character and tradition.

I return to the hotel. Restaurants don't open until 9:30 or 10:00, so the only dinner option is a nearby MacDonalds (ugh).

I go with Paco and Daniel to the University. We talk about computer stuff for a while, then head into town to see Roman ruins. It turns out the Merida was a major city in the Roman occupation of Spain; the name comes from "Emeritus" - Merida was a popular retirement site for high-ranking Romans.

At the top of a hill near the center of town there are side-by-side Colliseum and Amphitheater, both very large and fairly well preserved. The Amphitheater is still used for various types of performances. 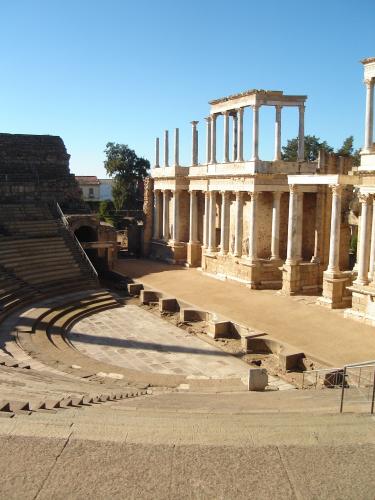 We walk through town to a nice restaurant featuring Extremena cuisine. I'm still full from breakfast, so I have a bowl of soup, which turns out to be Extremely large.

We visit the Roman archaeological museum, which is huge and impressive. It's built like a cathedral, and features a variety of statuary, mosaics, pillars, friezes, and coins. Underneath is a dimly-lit crypt; it's built above a graveyard. Daniel is quite an expert, and provides excellent commentary. 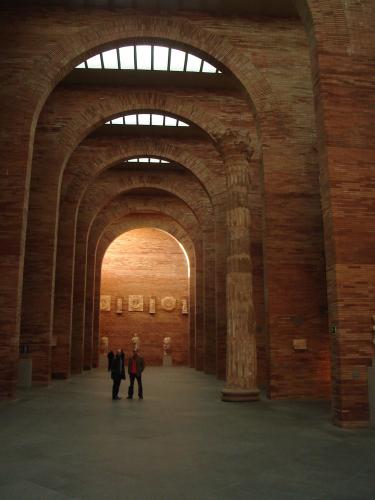 At 6:30 PM I return to the University and give a talk for a group of about 50 students. Then Paco, Daniel and I have dinner at an extremely nice restaurant in town.

I follow Daniel's car to Caceres; the Hispalinux conference is at the school of law there. I give another talk (actually more or less the same one) and then participate in a "round table" with Paco and some government officials who have been involved with upgrading the technology of the Extremadura region. Then I listen to a talk by Alejandro (from Zaragoza) who's working on social-networking stuff related to BOINC, and he and I talk for a while afterwards.

I drive back to Madrid. Even with the GPS I have considerable trouble finding a gas station and the airport. The young man at the Avis kiosk is wonderfully nice, but then I have two unpleasant experiences. First, I go to a cafeteria and have to wait for about 10 minutes at an empty counter for someone to serve me. The meal is bad, and as I eat I feel nausea creeping in.

Then, not wanting another 45-minute wait, I get a taxi to the hotel. At least, I try to; the driver tells me this is the wrong place to get a taxi to the hotel; I need to go to the upper level. I do that, but there are no taxis there. He was trying to get rid of me because the ride to the hotel is very short, not enough profit for him. What a jerk!

So I call the hotel, and this time the bus comes fairly quickly. I settle into my room and realize that my nausea is not just from the food - I've succumbed to the stomach virus from Noah and Erica. I spend the night on the verge of vomiting, and in the morning I barely have the strength to lift my backpack and shuffle downstairs. On the plane, I locate an air-sickness bag and hope for the best. But I relax, breathe deeply, close my eyes, and everything is OK. I manage to rest a bit and by the time I reach Frankfurt the worst is past, and the long flight back to SFO is bearable.