Noah and I plan a week-long trip to my parent's "Dacha" (vacation house) in Sunriver, OR (near Bend), with a stop at Mt. Shasta on the way up. We leave Berkeley at 12:30. Noah realizes we haven't brought tunes, so I return home and get a stack of CDs. But we do forget the GPS and Noah's hiking boots.

Long drive on I-80, 505 and I-5. We stop a BK and Noah has an unsatisfying Kid's Meal. Noah stumps me in Vermicelli with "cupcake".

Mt. Shasta is shrouded in clouds, and we don't see it until we're up close. We get to Weed and locate the Motel 6. A weird guy from Montana is riding around the parking lot on a scooter. We walk around Weed, which is economically moribund, lots of stores boarded up. We eat at the "Asian-American BBQ", run by a Thai couple, which got 4 stars on Yelp but is actually not good. A guy tells us about a carnival on the other side of town.

At the carnival we share a piece of lemon cheesecake. A lone musician plays guitar on the soundstage, to no one. We ride on the Ferris wheel, which costs $4 and has a long line, but offers a good view of Mt. Shasta. 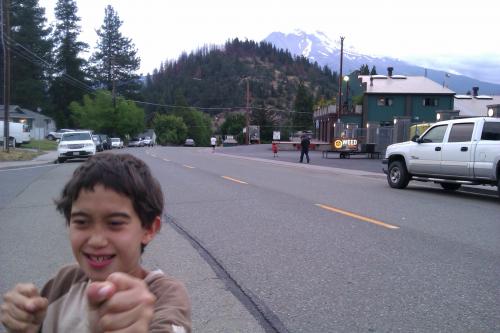 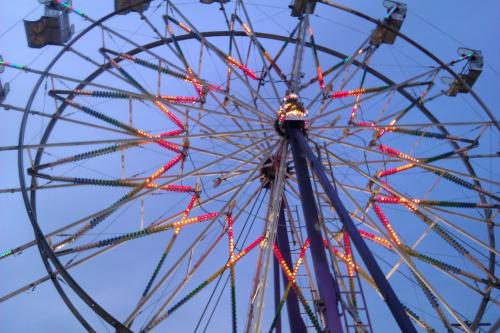 We have breakfast at the "Hi-Lo Inn" in Weed, then drive to the Bunny Flats trailhead. Noah has old busted shoes and new ill-fitting shoes.

We're on the trail at 9:00 and reach Horse Camp at 10. I feel very tired and have migraine auras (but no headache). I chat with the caretaker at the hut, who was there last June also. 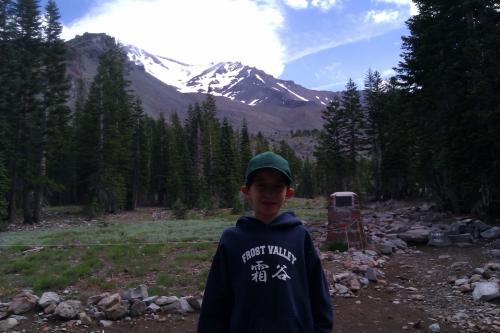 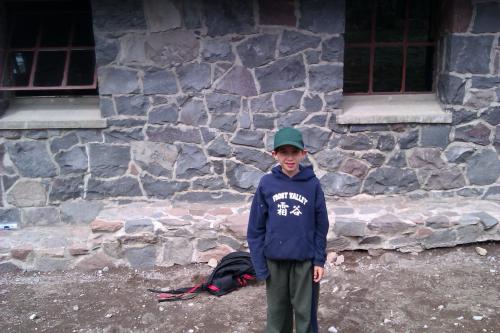 Noah wants to continue. We go up the summit trail on Olbermann's Causeway, past the treeline, up a long, steep, rocky slope, and to 50-50 Flats, where we chat with some campers. There were thunderstorms last night. They look shell-shocked; none of them came close to summiting. We visit some snow in a nearby gully. Noah collects rocks; there are many colors of volcanic rock. We eat Fig Newtons. 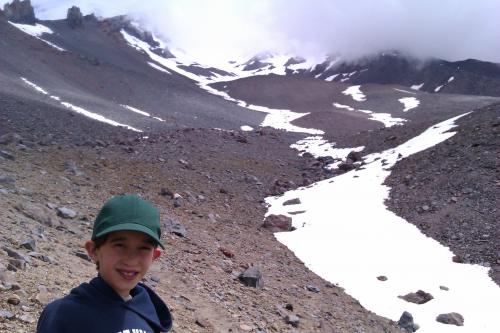 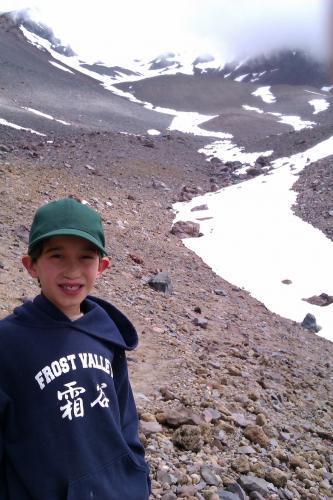 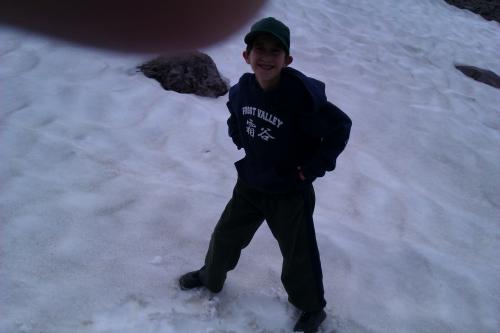 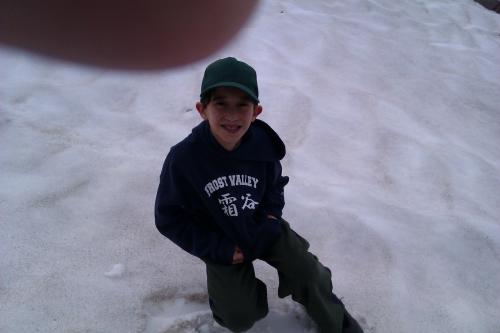 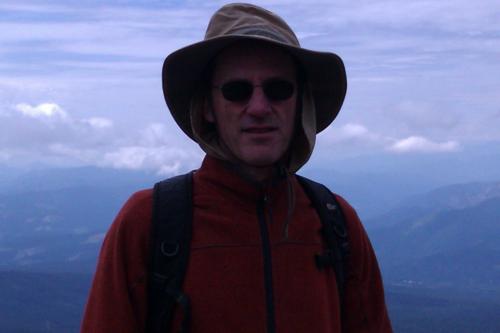 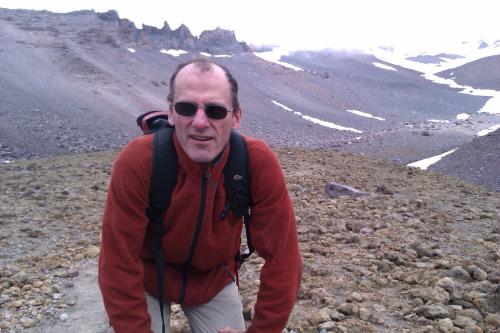 Turnaround time is noon. It's 11:40, so we turn around. Noah makes plans for next year: camping at Helen Lake, bringing climbing gear, and exploring up Avalanche Gulch. He's very impatient for next year to arrive.

We return to the car around 2:00 and eat a nectarine.

We drive back to Weed, then N on 97 toward Bend. Noah gets hungry on a long barren stretch of road. We finally stop for food at another BK in Klamath Falls. Noah complains about the mystery yellowish sauce on his Big King burger.

I'm tired from lack of sleep, and pull over at a rest area for 15 min. to close eyes while Noah lets out energy.

We arrive at Sunriver ~6:30. Chris, Steve, Janice, Sean, Nick, and Jake are there, sitting down to dinner. The kids watch Minecraft videos on YouTube, then go in the hottub and compete holding breath.

We set up our beds in the office: me in the foldout sofa, Noah in the loft. Noah doesn't sleep well because of the skylight in loft.

Steve, Chris, Noah and I go on bike around Sunriver, out into the countryside, past the airport, horse ranch, and golf course.

We drive to Sunriver Village, which has a number of kid attractions: bumper cars, mini golf, "power jump" (bungee-assisted trampoline), climbing wall, and bouncy castles. These are exorbitantly priced. I decide to get Noah the $30 all-day bracelet. We get our money's worth; he does the bumper cars about 10 times.

While Noah is doing power jump, the rest of the group abruptly and mysteriously disappears. Noah and I wait for a while at one location, then the other. We walk the length of the mall. We look in restaurants. Nobody. I don't have my cell phone. We speculate about what might have happened.

We check the parking lot; Steve's car is gone. We buy some food at the grocery store and decide to just enjoy the afternoon by ourselves. As Noah does his 2nd round of mini-golf, the rain starts. It gets harder, then very hard, then hail, then thunder. We have no choice but to wait it out. Noah does a couple of more bumper cars. Finally the rain stops and the sun comes out. We walk back to the Dacha. Mist rises from the damp pavement. The solution to the mystery is that Steve forgot about us. At dinner, there are no inquiries or comments about what happened. A switch flips inside me.

Later, the group goes rafting on river, but apparently there's no room for Noah. I'm starting to wonder what the deal is.

Noah and I drive to a nearby cinder cone, Lava Butte. I expect to be able to pull off the road and bushwhack up this, but it turns out it's some kind of state park, and the only way to walk up is on a long paved road.

There's also an immense area of jagged black volcanic rock, and some paved paths go into this area. I spot some faint trails up the cinder cone, and hope that if we go to the top of the lava rock area we can cut across the rocks and get to these. But the paved path doesn't go very close to the trail, and there are some steep cliffs in the way. Also Noah is feeling tired. So we decide to just turn around. We visit a small museum with exhibits about volcanic activity in Oregon. 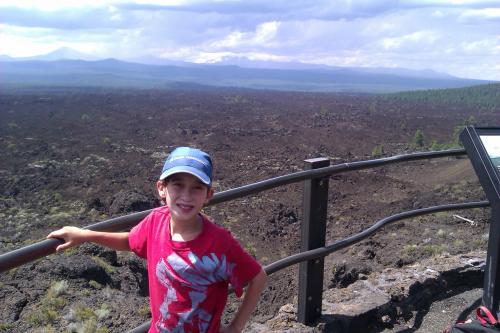 When we get back to the house, the others have returned. There is no discussion of our visit to Lava Butte.

I ride my bike to Fort Rock Park, processing the current situation and recalling past experiences in this place. In the middle of the large grass field, a dad with two small kids launches a solid-fuel rocket. The rocket goes ~500' up. A slight breeze blows the rocket into top of a pine tree at the edge of the field. The kids are disappointed, but the dad accepts it philosophically.

I take Noah, Jake and Nick to a nearby grassy area where we play tackle football; Stephen joins us.

Noah and I watch the MLB All-Star game before and after dinner. The group watches "Tangled", a Disney remake of Rapunzel.

Noah and I work on a Python program to solve "24" problems. We discover the itertools module.

Toward bedtime, Noah and I discuss the social dynamics of the visit, and whether we should leave earlier than planned.

In the morning we all (except Steve/Chris) visit SHARC, a water recreation area that Sunriver has built just downhill from the Dacha. It's a big production, with 2 water-slides, a simulated river, indoor and outdoor pools, and a rip-off snack bar. Noah enjoys splashing around and shooting baskets. I read a book about mindfulness and think about how it applies to the current situation.

At 2 PM Noah and I set out to climb Paulina Peak, the highest point in the hills that encircle Newberry Crater, a huge (5 mile diameter) volcano remnant. The crater has two large lakes (Paulina Lake and East Lake) with geothermal vents on the north edge, a cone between them, and a huge obsidian flow on the south side.

We're unable to locate the start of the trail, and there's an unpaved road all the way to the summit, so we get lazy and drive to the top. There are several large rock towers a few hundred yards away, and we hike down to them and scramble around. We collect obsidian chunks. 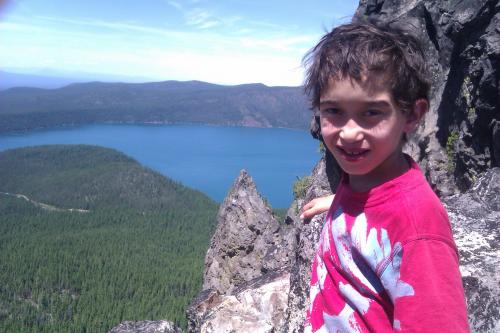 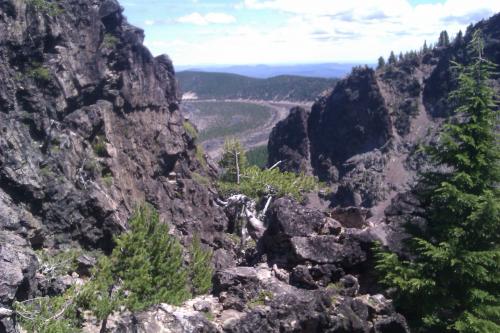 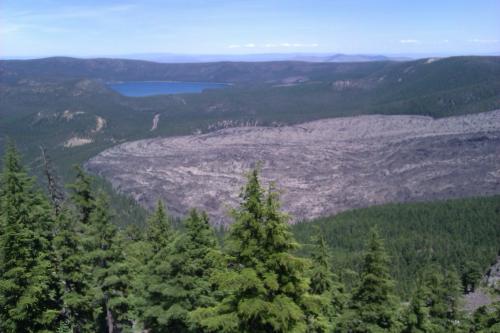 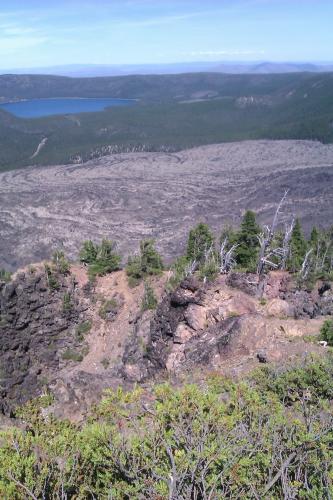 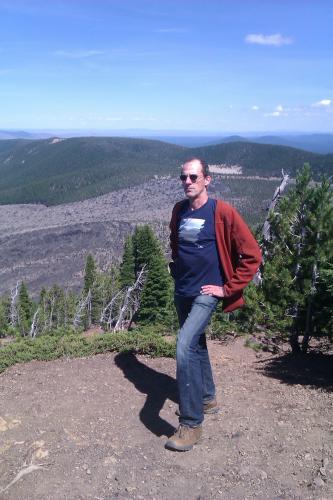 Noah proposes the "Ferris-go-round", an amusement park ride that can pivot between horizontal and vertical. We eat a bag of peanut M&Ms.

Returning to the Dacha, we have dinner, then go with Nick and Jake to Fort Rock. Noah builds a stone wall, we play games of hide and seek and pine-cone baseball, and the boys do a lot of running.

We head out early with Steve and Chris for Smith Rock, north of Redmond near Terrabonne. Smith Rock is a Mecca of rock climbing. It has hundreds of bolted sport routes. I examine the starts of a few of them, and am reminded that outdoor climbing is a lot harder than indoor. 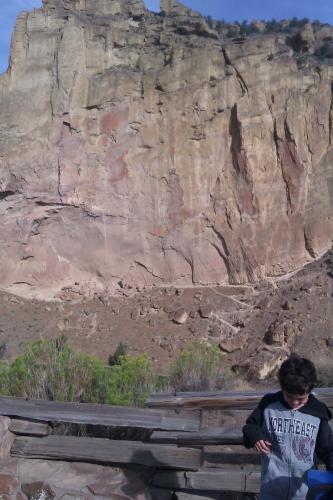 The cliffs are maybe 500' high 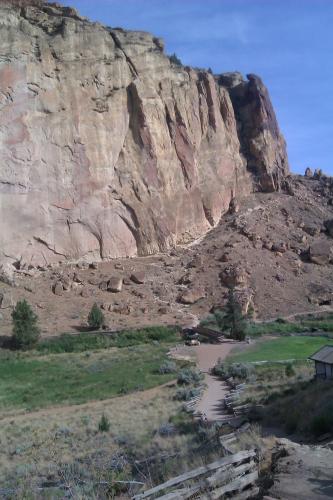 We do a nice hike which goes along a river, circles around the back of the rocks, goes up a gully near Monkey Face, then descends steeply down the front face. 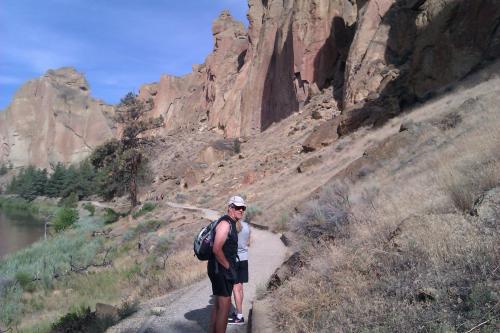 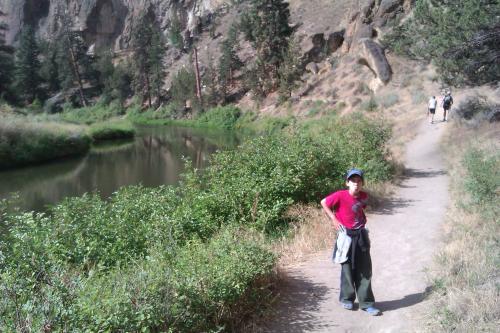 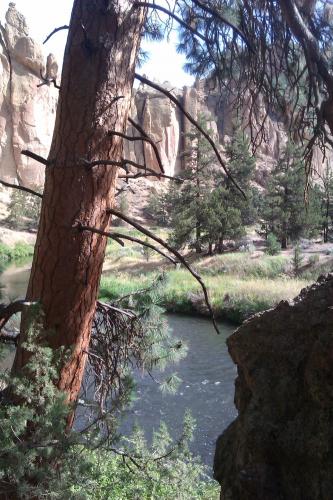 We pass a place with dozens of mini-cairns. 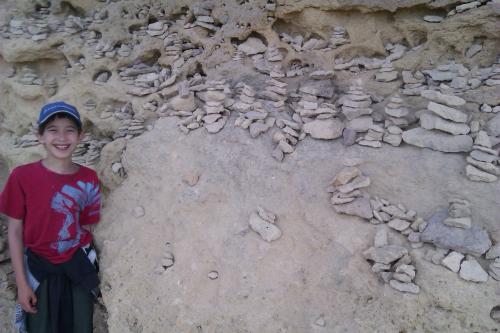 A group of teen-agers, with a guide, is crossing a rope from the cliff to the Monkey Face mouth (a cave), doing a 10' stretch up to the nose, then getting lowered 150' or so to the base of the tower. 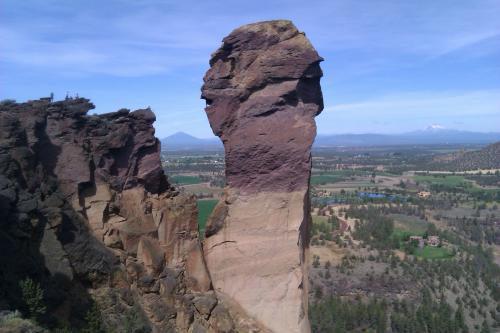 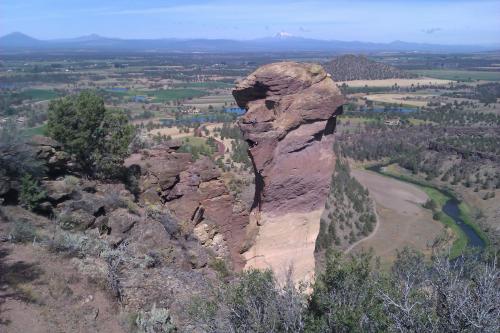 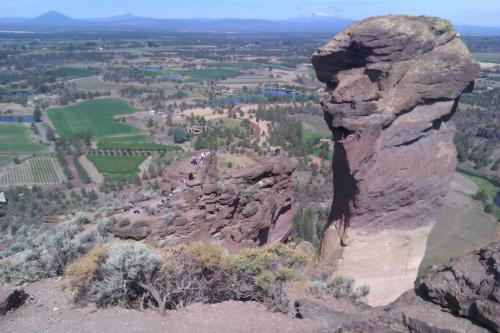 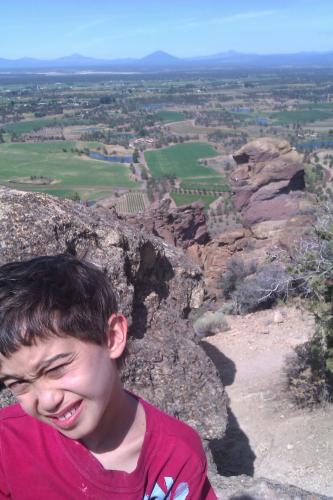 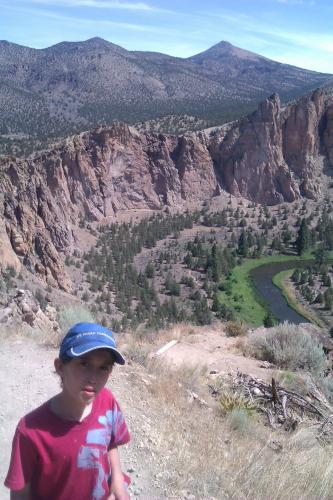 On the way back we stop at Fred Meyers, a mega-store found in the Pacific NW. I buy Noah a new pair of hiking shoes, and Steve buys a microwave to replace the old one at the Dacha.

In the late afternoon I take the kids down to the basketball courts near SHARC. On the way back, we balance on logs and harvest seeds from juniper berries. It takes very little to keep the kids entertained outdoors and away from computer screens.

I wake up at 5:30 AM, and Noah and I pack up and are on the road at 7. We stop at the Shell station for coffee, greasy egg/sausage/cheese biscuits, and even greasier donut holes.

Our strategy is to stop briefly at every rest area and throw the football. I chuck the nauseating donut holes.

It's a dazzling, clear day. For the first leg of the trip (Sunriver to Weed) Mt. Shasta is right in front of us the entire way, gradually getting bigger. I'm very fond of this mountain. 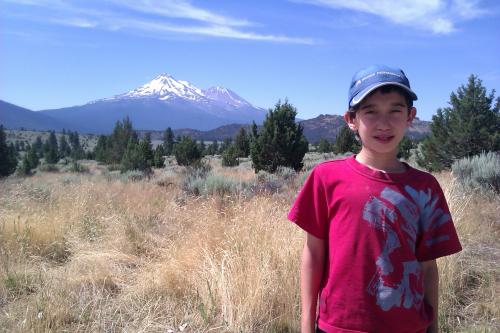 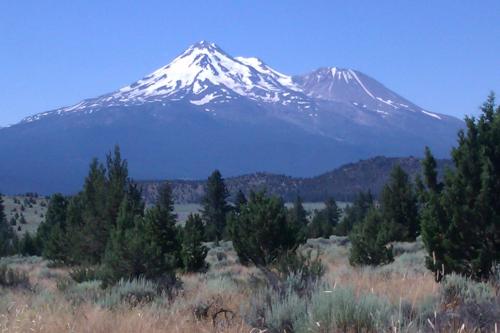 I want to stop at Castle Crag and do a short/fast hike, but Noah doesn't feel like it.

Noah gets hungry around Redding. Of the various fast food places, he wants KFC, but there are no KFCs in northern CA. After some meandering we end up at Popeye's Fried Chicken, which we both agree is terrible and vow to never return to.

In the central valley it's pretty hot, maybe upper 90s. Noah develops the technique of soaking his head under a faucet at rest stops. Noah has a headache for part of the drive so he doesn't want to play car games.

We stop at a gas station in the middle of nowhere. Working the cash register at the derelict cafe/store is a large hispanic transvestite with heavy makeup and false eyelashes - straight out of Baghdad Cafe.

In Fairfield we stop and play a round of mini golf at the Skandia Family Fun Center.

Traffic into Berkeley is light and we're at Erica's house before 6. The total drive is 11 hours but that includes roughly 2 hours of stops.

This was the longest I've been continuously with Noah, and that aspect of the trip was wonderful. We got along well and had a lot of fun together.
Copyright 2022 © David P. Anderson