Note: the good pictures on this page were taken by David Gedye.

My parents Alice and Larry own a vacation cabin in Sunriver, Oregon, a general-purpose year-round resort kind of place, purchased with the intent that I and my siblings would use it occasionally. After 5-6 years I finally took them up on it, and invited my friends Dave and Chris Gedye and their 4-year-old Grace for a long weekend of winter recreation.

Lynne and I flew up on Friday afternoon. Scanning stations on the rental-car radio, we heard the most amazing music -- tribal drumming with multiple layers of shouting and screaming. Reluctantly we turned this off as we pulled into the Fred Meyer mega-store in Bend to stock up on groceries. I also bought a Magellan 315 GPS device, which may figure prominently in future expeditions.

I had sent the Gedyes a Mapquest URL which, it turned out, referred them to a completely different Rhododendron Lane. So they endured a bit of navigational angst. Dave had fortuitously printed the cabin's phone#, and I ended up talking them in over the phone.

On Saturday we headed to Mt. Bachelor to ski (Chris, whose back was sore, stayed home and explored outlet malls). Renting skis at the mountain was a major disaster -- over an hour of waiting in line. Finally we got on the slopes. Lynne and I did some good intermediate runs. I wanted to try Cow's Face (a black diamond) and hoped to avoid the horrible traverse at the bottom by cutting left quickly. But somehow we ended up on the traverse anyway, and it was worse than usual because of deep, heavy snow.

We hooked up with Dave for lunch and did a run with him and Grace. They were using a webbing-based harness arrangement. We tried to get Dave to let us amuse Grace while he did a double-black or two, but he declined.

The next day Dave and I went back with snowshoes. There are two good-size mountains nearby, South Sister and Broken Top. I had vague ambitions in this direction, having read Amar Andalkar's extremely excellent account of a South Sister ski ascent. But the mountains are about 5-6 miles off the road (it gets closer, but that part wasn't plowed). We toyed with the idea of renting X-country skis to get closer. But in the end we decided to climb Mt. Tumelo, which is right across the highway from Mt. Bachelor. It's more of a hill than a mountain - maybe 1,200' above the road.

We followed ski tracks up the hill, and went through a beautiful sparse pine forest with several feet of snow on the ground. 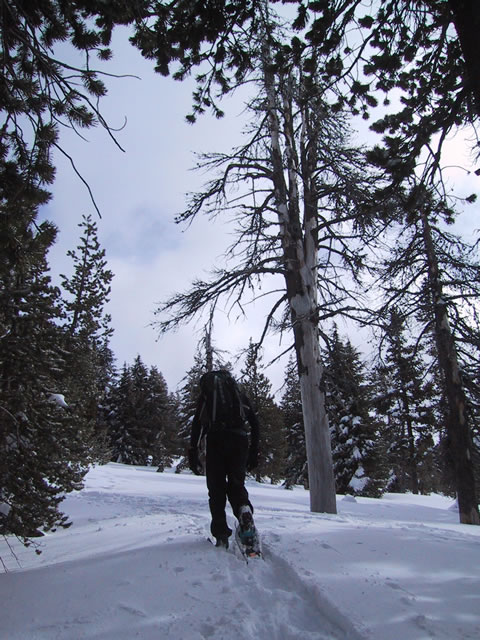 We met a skiier and several snowboarders. We crossed a lovely meadow and slope near the top, and were on the summit in 90 minutes or so. 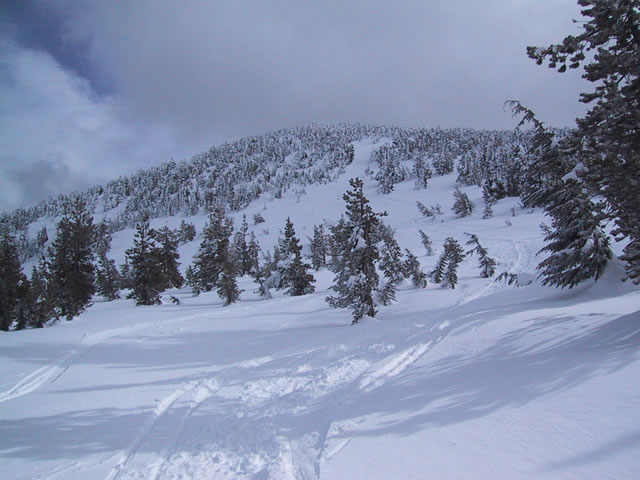 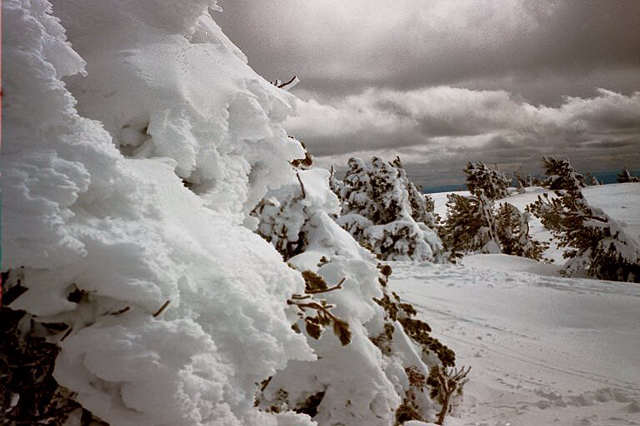 Near the summit
The view from the summit was fabulous. The skiiers on Mt. Bachelor were visible as tiny specks, flowing downhill like so many ants.

Panorama from Mt. Tumelo. Scroll all the way to the right!

On the far side of Mt. Tumelo was a large powder-filled bowl, crisscrossed with ski and board tracks. Dave did a forward somersault off a cornice. 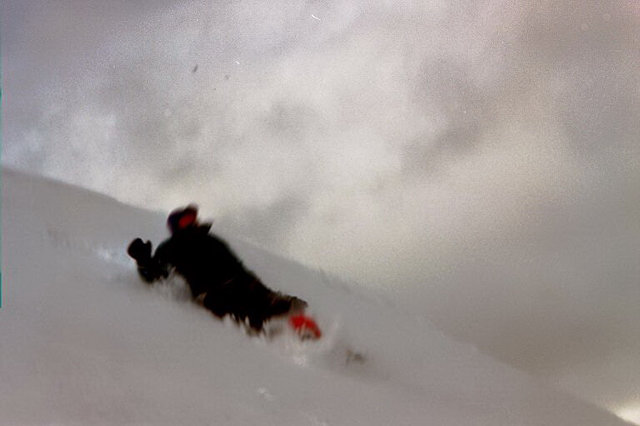 Somersault landing
I ate my lunch: a bacon sandwich and brownies. 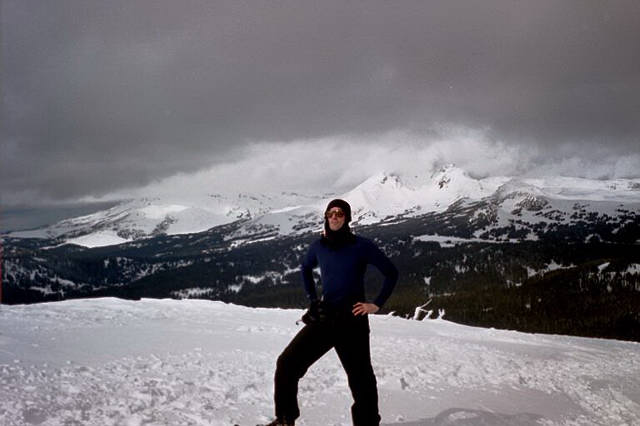 I strike a noble pose. South sister (mostly in clouds) and Broken Top in background.
The walk down, giant steps in deep snow, was easy and rapid. As we neared the bottom we passed a high school group, packed most impractically: one girl carried a large Coleman stove in her arms, another carried a huge rolled-up foam mattress. Bringing up the rear, two boys struggled with a sledge of some sort, possibly a small boat, full of heavy stuff including a propane tank hanging off the back.

We got back to the car, examined the parking ticket, and headed over to the ski area parking lot. There is a another medium hill (800' or so) at the right end of the ski area. We put the snowshoes on again and climbed this hill. 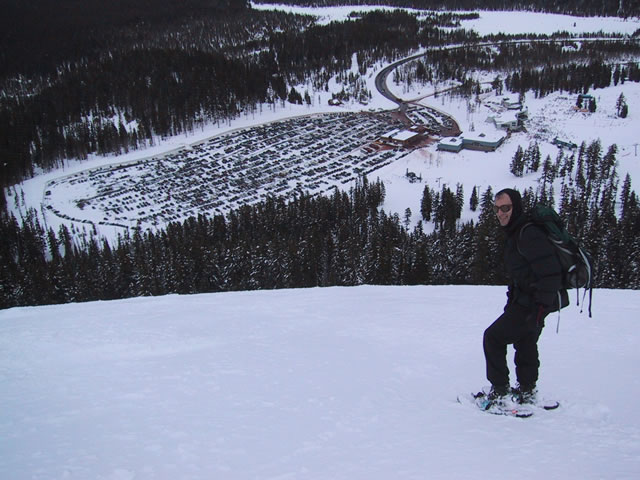 View from the hilltop
This one was much steeper and harder, especially at the end where my shoes didn't stick in the deep loose snow. I was trembling and exhausted - coming down with a cold, it turned out later.

We mostly glissaded down, with some difficulty because of the deep snow. Dave tried the head-first approach, and settled on a seated position with snowshoes breaking the trail.

We went to the lodge to pick up Lynne, who had been skiing and it turned out had slightly hurt herself and left early (the other guy, a snowboarder, was hurt worse).

That evening we enjoyed some protein-intensive spaghetti that Chris had prepared, watched several episodes of Black Adder, played some Boggle, and played two rounds of WWJD, highlighted by Chris's 'Carry my goats, poor impish lout'.

On Monday we all returned to Mt. Tumelo, and we showed 'the girls' the path we had taken. A few hundred yards up the trail was evidence of failed snow-cave building - we wondered about the fate of the high-schoolers. 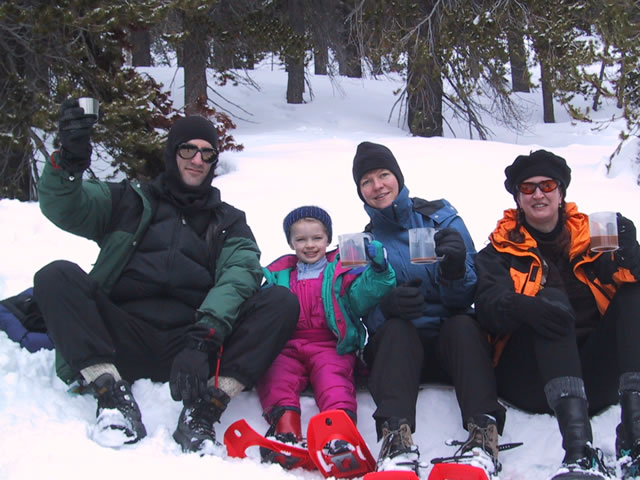 Dave fashioned a sled using a foam pad encased in a plastic bag. Grace enjoyed this, and the rest of us took our turns, sliding and shrieking and spinning wildly out of control. 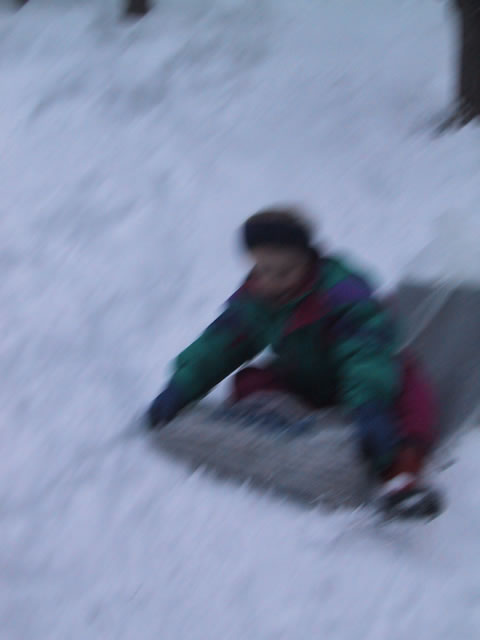 We returned to Sunriver and watched Chris and Grace strut their stuff on the skating rink. 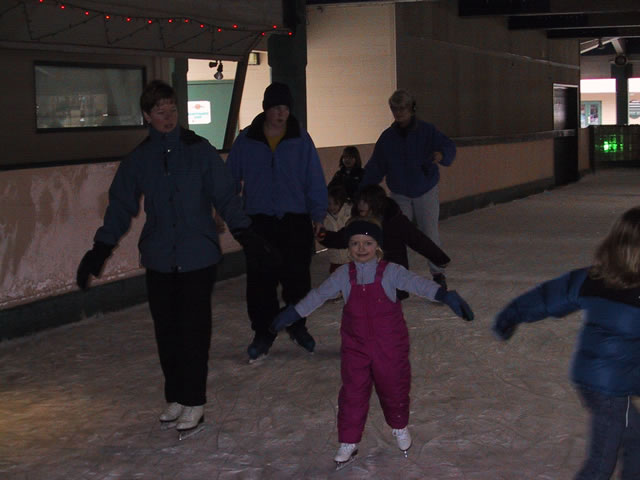 Then we all had to pack up and head back to civilization. We discarded left-over food, except for a six-pack of beer which we hid behind some cans of paint.

I personally wouldn't have minded staying a lot longer. Maybe we'll return in the summer and see if the beer is still there.