My Seattle-based brother Stephen and his sons Matt (16) and Ken (14) were here for the week between Xmas and New Years. I organized a 2-day ski trip to Lake Tahoe. Lynne had to back out because of work, but loaned us her nice big car. My 9-year old nephew Ryan was a last-minute replacement.

We picked up Ryan in Pleasant Hill at 9:30 AM Thursday, and drove up highway 50 to Sierra at Tahoe. I taught people the usual car games. We arrived around 12:30 and got in a good half day on the slopes.

Then we continued on to South Lake Tahoe, a unique town: split by the state boundary, its California half is a long strip of motels and ski shops, and its Nevada half consists of 4 giant casinos. We toured the casinos; their security personnel kept a close eye on us because of the minors. We ate at the buffet at Harvey's, a monument to gluttony.

The next day Stephen and I dropped the kids off at Heavenly (a big ski area) and rented snowshoes; I also rented snowboard boots. On the advice of the rental person, we headed for Carson Pass, about 35 miles south of Lake Tahoe on highway 88. We ended up pulling off the road about 5 miles north of the pass, on a stretch with a large meadow on one side and a couple of impressive mountains on the other. We donned the snowshoes and headed up the valley between the mountains. 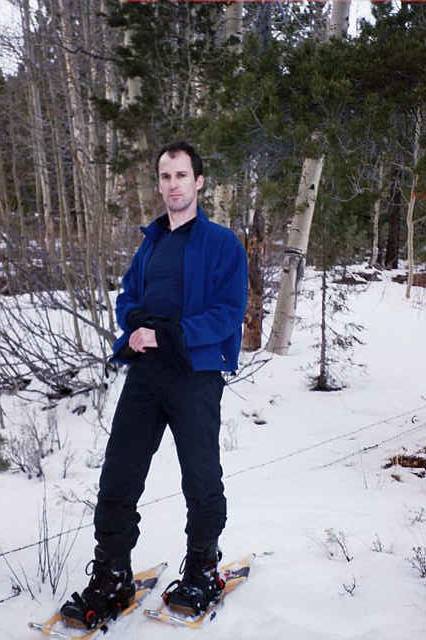 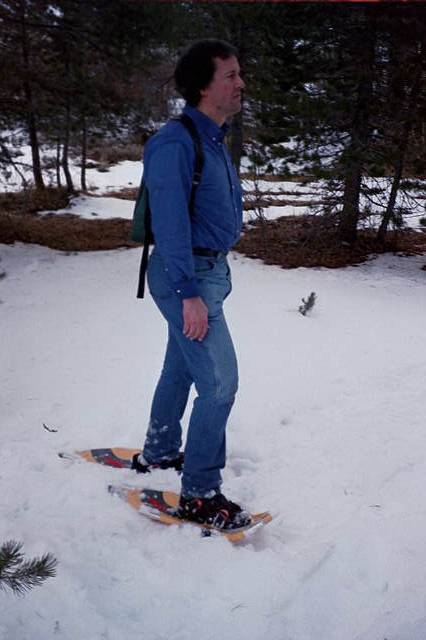 I immediately fell in love with snowshoeing. They let you move easily in most snow conditions; the built-in crampons can take you up steep slopes. Steve, who outweighs me by quite a bit, had some trouble sinking into the snow; I think he needed larger snowshoes.

We came to a snow-covered dirt road and followed it for a bit. Then we struck out for the head of valley, following some recent X-country ski tracks. Halfway up the slope was an enormous dead tree; the snow thinned out there so we took off the snowshoes and climbed up come class 3 rocks. We came across two abandoned mineshafts, one sealed up with timbers, and various metal objects nearby. (Referring to a map later, I think this is the Alhambra mine).

The view became ever more spectacular as we ascended, and we pushed on to the top of a hill between the two mountains. The mountains, by the way, would be excellent goals for a day hike in either summer or winter; they're about 1,500 - 1,800' above the road, and are protected by major rock cliffs.

The descent was amazingly easy; I stayed on the snow where possible, digging in my heels and sliding down smoothly. Only when it flattened out did I put the snow shoes back on. Back on the road, I recited some Robert Service, and Stephen recited a poem by P.G. Wodehouse.

We reached the car around 3:45 PM, sped back up to Heavenly, picked up the kids, and were back in the Bay Area by 9:00 or so. A good time was had by all. My sister Rachel reported that on his return, Ryan had grown up into a young man.