Rob and I want to do some snowshoeing in the Sierras, so I contact Kathi, who led last year's Sierra Club climb of Mt. Baldy. Turns out she's going up on Saturday, and she invites us along.

We stop at Wilderness Exchange on the way out of town, and Rob buys a pair of MSR Denali Evo Ascent snowshoes (same as what I got a few days earlier).

We stop in Sacramento and have dinner at Don and Gayle's, then continue to Colfax and check in to the Colfax Motor Lodge (very nice - silent heaters and good pillows). I've had a weird infected-head feeling for several days, and am not 100%.

At 6:30 AM we head across the street to MacDonalds, where we meet Kathi and her friend Julie. I have the Big Breakfast :-(. We climb into Kathi's Prius and head up I-80. Kathi points out many, many peaks along the road. We turn south on 267, then along 28 into Nevada and around the east side of the lake. We park at a rest stop; the 20-minute parking limit is not enforced in winter.

Looming about 2,500' above us, at the top of a steep slope, is a rocky outcrop called Sand Harbor Outlook. Behind this, 100' higher, is Herlan Peak. 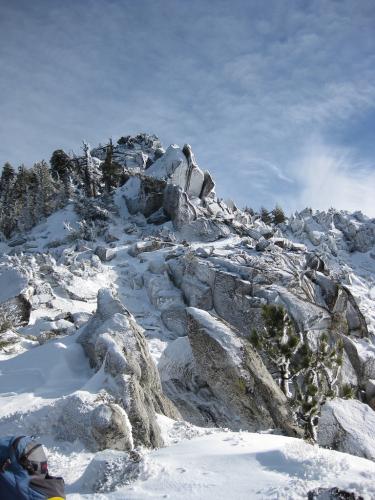 Sand Harbor Outlook from up close

We cross the road and start up the slope. Right off the bat, Rob falls and breaks one of his poles. We try to figure out how to fix it with duct tape and a pocket knife, but can't. Rob continues to use the stump of the pole, with no basket.

We climb through a pine forest with lots of fallen trees and big rocks. The snow is unexpectedly deep. It starts out consolidated and the going is fairly easy, but as we get higher it gets colder, and the snow becomes dry and powdery. This is good for skiing but bad for snowshoeing: very slippery. Kathi observes that the Eskimos have 100 words for snow. My word for this snow: Pain in the Ass.

Breaking the trail is hard work; you have to stamp 2-3 times to make a platform where your snowshoe will stick. Julie leads most of the way up, and is spelled occasionally by Kathi. Disgracefully, I don't take a turn leading until near the top. My lame excuse: I don't have my gaiters and the snow would get in my boots.

Kathi wants to go straight up the whole way (knee issue), whereas Julie and I would prefer to zig-zag at a reasonable angle.

I'm having a great time. I'm overwhelmed with mountain euphoria, the feeling that everyday life is a dimly-lit dream from which I've finally awoken to experience reality, vivid and wonderful.

Rob is struggling big time, constantly slipping. This is due to lack of pole, snow conditions, and the fact that his snowshoes are a bit small for his weight.

Side note: Julie and Kathi forward-point the entire way, whether they're going up or traversing. My technique is totally different: side-stepping and herring-bone in the steep parts. This is hard work but pretty much eliminates slippage. But I'm not leading, so I just do it their way.

We head for a ridge left of the outlook. We eventually reach the the Flume Trail, the remnants of a flume used to transport logs (this area was logged at one point). At that point the slope becomes even steeper (Kathi estimates 35 degrees). It's simply impossible to go up with the snow like it is; the idea of turning around enters my head.

However, Kathi traverses a little and is heroically able to keep going; we keep grinding away. We've been in the shade the entire time. Finally we come over a small rise and into the warm sun. We stop and have lunch on a rocky outcrop. Julie has become a vegetarian in the New Year, and gives me some of her wasabi peas. Rob is one hurting unit. He tries to put on his 8" extenders, but they don't fit - they're for the standard Denali, not the Evo. 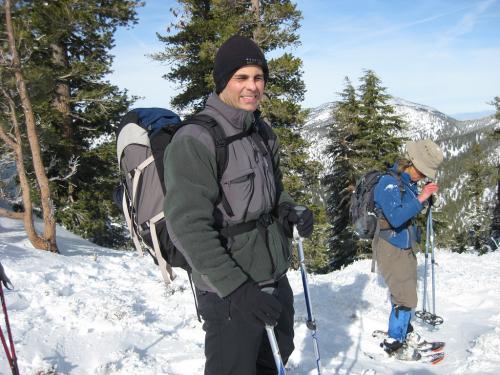 Rob's in a world of hurt, but manages a wan smile 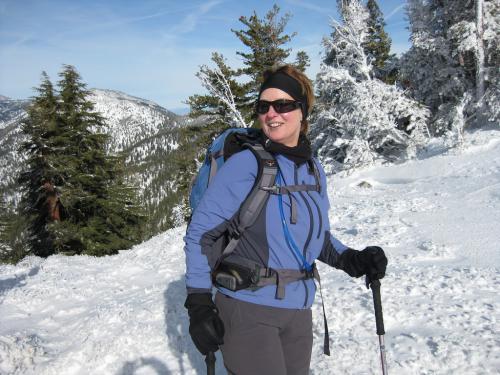 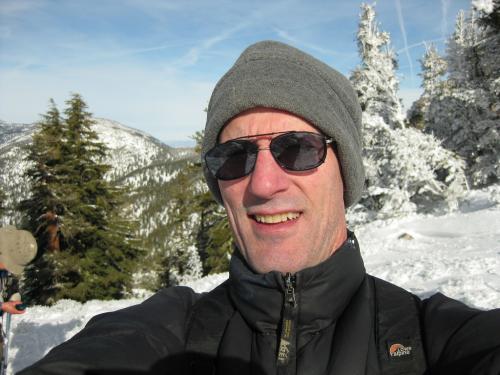 We get moving for the final push. I finally get off my ass and lead for a little bit. There's a final steep bit which I herringbone up pretty fast, arriving at the top panting and hot. I strip to the waist, soak up some rays, and let my overheated flesh cool off.

I hear shouting below. Kathi's snowshoe has fallen off, and she has to go back a ways to get it. Finally the others reach me. We're on a plateau behind the Sand Harbor Overlook. We decide to skip this and head for Herlan Peak, which is a little knoll a few hundred yards away. We hang out there briefly. I notice that Kathi's hands and legs are shivering - a bit worrisome, but she hangs together. 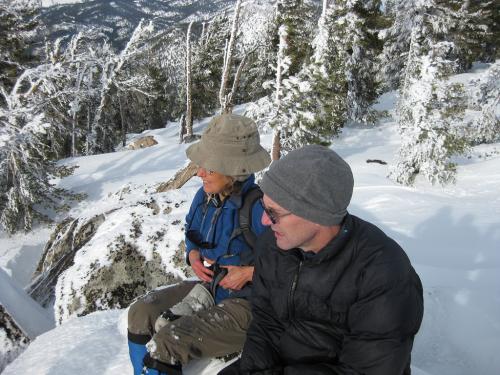 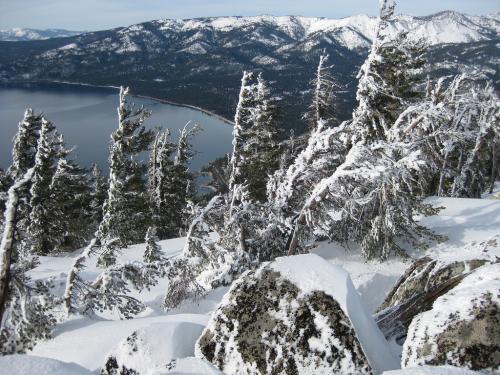 We head down. I claim to intuit Julie's Midwest origins. The deep soft snow is a delight on the descent; it's like walking on a giant down pillow. Kathi's snowshoe comes off a couple more times. 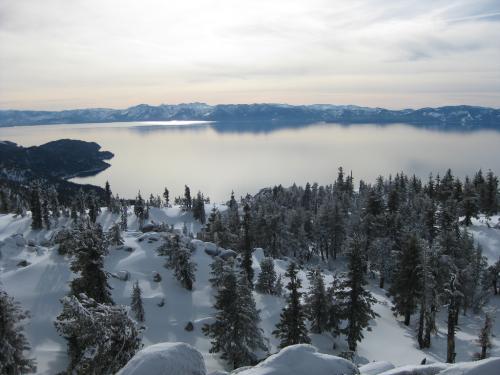 My long stride lets me go fast, so I lead most of the way down. The gradient tries to push us right, into a stream, but we keep veering left and eventually go over a ridge, emerging very near the car.

On the way down there's a fantastic flaming sunset, reflected in the lake, and ringing the entire horizon with a rose-colored glow.

On the drive back, a stream of SUVs is emerging from Northstar and making a big traffic jam. When we reach I-80, the westbound direction is backed up for miles. Kathi hastily switches to a little-known side road that avoids most of the backup. Kathi seems to have night vision issues, and there are some odd panic stops and a confrontation with a giant menacing truck.

I teach Vermicelli. Kathi starts off with 'chocolate chip cookies'. Julie goes next with a B. She coyly answers all my guesses with 'butternut squash'. We're not making progress as we approach Colfax, so we switch to yes-or-no question mode, and converge to 'beef jerky' in the nick of time.

The MacDonald's parking lot is jammed with A-hole SUVs jockeying for parking spots. We say our farewells. Rob and I have dinner at the Tower Cafe in Sacramento, which was recommended by Victoria, the Spanish woman from Stockton who was on last year's Mt. Baldy trip. I have crab cakes - excellent (and a good Vermicelli candidate).