On Thursday I drove up to Lake Tahoe with David Rockower, and we stayed at his dad's condo with friends Tom and Gretchen, their kid Hayden, and Mac (from Berkeley).

On Friday it was snowing pretty hard but we headed up anyway to the Stagecoach entrance of Heavenly. We all rented downhill skis and put in a pretty good day, even though the wind and snow made it a little miserable.

Saturday dawned gloriously sunny, and of course a thick layer of snow covered everything. I switched from skis to snowshoes. Heavenly was supposed to have a new Nordic/snowshoe/tubing area, but at the last minute I was told this wasn't open yet. Fortunately I caught Dave on his way to the gondola, and borrowed his car keys.

I drove to Spooner Lake (east shore, near 50/28 split). There was a slope where lots of kids were sliding on tubes and disks. I skirted this slope and continued along a ridge, then through a level forest, following some ski and snowshoe tracks. I soon realized it was easier to walk in new snow, and had a unique feeling of navigational freedom; I just wandered all over. 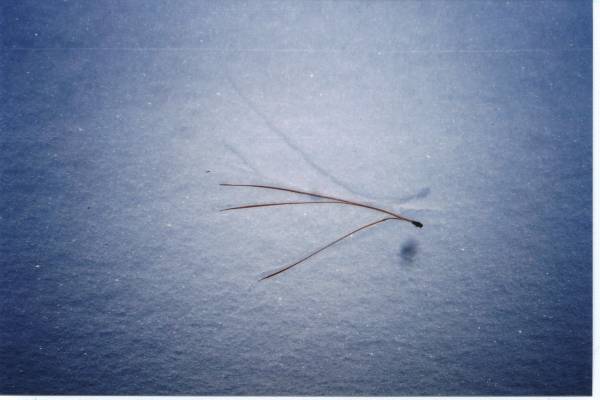 Pine needles in the snow 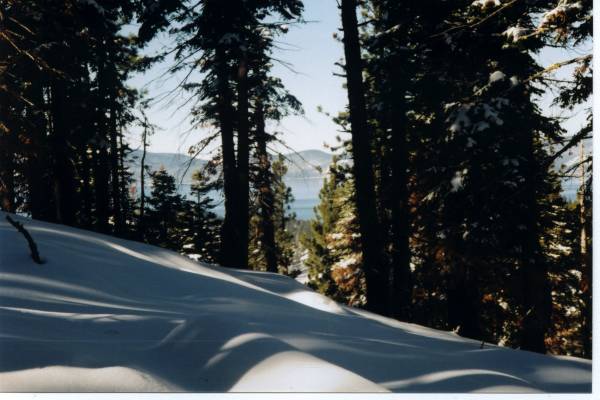 Nice stuff to snowshoe in

I decided to head uphill until I got a view of Lake Tahoe. After about a mile I came to a beautiful pile of ugly rocks, about 50' high. 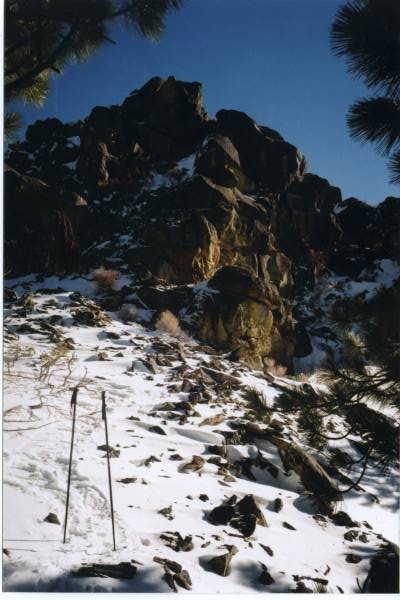 The rockpile
I took off snowshoes and climbed to the top, from which there was a spectacular panoramic view of the entire lake and the mountains around it. It was warm and I lingered there for about a half hour.

On the way back I met another snowshoer who, it turned out, was an avid backcountry skiier and had gone from Lee Vining to Tioga Pass last winter. We chatted a lot about equipment, but all I can remember is a recommendation of Rainey bindings, sold only on the Internet.

It was still early - 2 or so - so I went back to the condo and cooked dinner, mostly about 8 lbs of chicken.

Next day I rented a snowboard and went back to Heavenly. I took the class for beginning adults, which was pretty good. I chatted with the instructor about skiing on Mt. Tallac, which is visible just to the west. I did 5 runs on the bunny slope, then did some beginner slopes on mid-mountain with Dave and Mac. I was pretty stable - not many falls - though I was boarding in a timid, defensive way: almost all 'falling leaf' traversing on my heel edge. Next time I'll be braver.

The high point of the trip back was that the passenger-side window of Dave's (borrowed) car jammed in the open position. We tried taping a garbage bag over the opening but it made a God-awful noise at highway speed. Eventually we took it off and drove most of the way with the window open and the heater on full blast.