Most photos by Ron Kuivila

The Grand Tetons are a group of steep, jagged mountains, just south of Yellowstone Park in Wyoming. Its various peaks - the Middle and South Tetons, Teewinot, Mt. Moran - soar a mile above the surrounding plain, pulling your gaze upwards and giving you a sore neck just like those Gothic cathedrals over there in Europe. And above the lesser peaks, the Grand Teton rises yet another thousand feet, austere and aloof, seeming to taunt 'are you man (or woman) enough to climb me?'.

Last summer, driving by the Tetons, I looked up, massaged my neck, and growled 'I'll be back' in my best Austrian accent. So when Ron Kuivila invited me out to his in-law's cabin in West Yellowstone, I phoned Exum Guides and arranged an ascent of the Grand (my first choice, Mt. Moran, was booked up). Ron, who has never rock climbed, gamely signed up too. We had to take two days of climbing school first.

We get up at 5 AM and drive from West Yellowstone, through Jackson, to the Exum office, stopping at 'Moosely Seconds' for Ron to rent sticky-rubber approach shoes. Ron and I get one guide to ourselves: Jeff, a goateed blond guy with a decathlete's build. We take a small ferry across Jenny Lake to the area around Hidden Falls and hike briskly past the tourists. Jeff tells us about the local wildflowers (Monk's Hood, Hare Bell) and the geology of the Tetons (tilted block at spreading center; dominant rock is gneiss, i.e. metamorphosed granite). The class covers:

Ron and I are model students. We get done quickly and do some extra climbing. Jeff stands for a minute at the base of Hidden Falls, enjoying the blast of cool air - a tradition, it seems.

We return to Jackson and check into a motel. On the front page of the local newspaper is:

Disaster story #1: two climbers were high on the Grand at 5 PM (a mistake). One of them, climbing on belay, was hit by a large rock and knocked unconscious for 5 minutes. His parter had a cell phone and called 911. A rescue helicopter lowered two rangers onto a ledge above them, just ahead of an incoming thunderstorm. The rangers managed to climb down to the injured climber, bivouaced with him overnight, and helped him down the next morning.

We pass up Bubba's, the local BBQ grease-pit, and instead have some decent Chinese food.

On the drive in we witness a scary scene: a pickup truck towing a boat, just in front of us, is veering all over the road and almost causes a head-on collision. He's quickly pulled over by rangers.

Our guide for today, Kent, has commuted 25 miles on his bike. Same location as yesterday. We cover 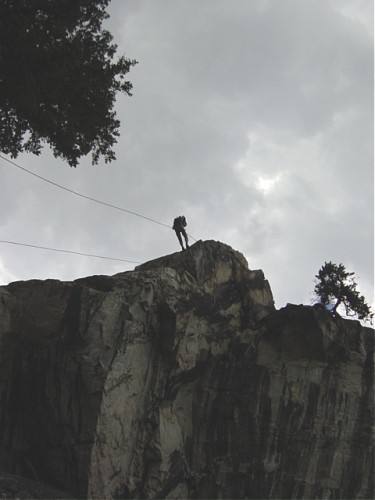 Me on the start of free rappel (note: camera is pointing upwards) 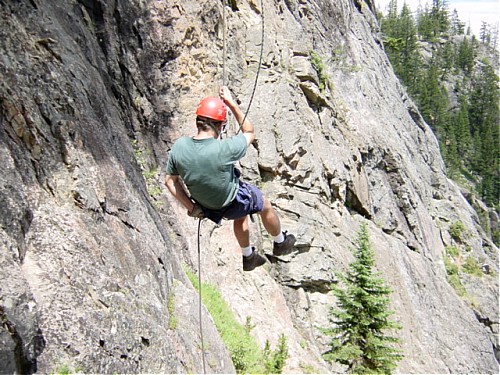 Ron finishes rappel. Multi-pitch climbs were on slopes in background.

Kent relates to us:

Disaster story #2: a few days ago a glider crashed into the Grand, near the summit, disintegrated, and tumbled down 2,000'. Exum guides reached the wreckage and recovered the body. Disposition of wreckage undecided. Another mountain plane crash: a DC3 in the 1940s crashed into Mt. Moran. Glenn Exum immediately climbed to check for survivors (none). This incident inspired a movie, 'The Mountain', in which a mercenary climber (Robert Wagner), learning of the crash, climbs to loot the wreckage. His father (Spencer Tracy) goes along to keep son from killing himself. There's a scene where Tracy is doing a bare-hand direct belay, rope slides through his bleeding hands etc.

Ron has been having trouble with climbing; he refuses to look at or think about his feet. At the end of the day, Kent informs us that we'll be doing the Owen-Spalding route, which has a bit easier climbing than the Exum Ridge. This is fine with me - both routes are 5.6 and below, so no big excitement in either case. A large group of teenagers, who we've been bumping into, will be climbing the same day.

There's heavy rain, hail, and distant thunder as we wait for the boat. Once we're under way, all hell breaks loose - high wind, major whitecaps on lake. The destination dock is on the lee shore; it takes two tries to avoid being pushed onto rocks.

The ascent, day one

We meet our guide (Miles), drive to the Lupine Lake trailhead (6,700'), and hike 8 miles and 5,000' up to the Lower Saddle, passing through valley meadows, pine forest, alpine meadows, past the treeline, up Garnet Canyon and many rocky switchbacks, through some big boulder piles, up a horrible dirt/rock slope, up a short gully with a fixed hawser (Miles belays Ron). It has clouded over, and rain spatters onto the rocks. We pass a young man who tells us that tomorrow will be 'the longest day of your life'. Thanks!

Exum maintains a canvas hut on the saddle. 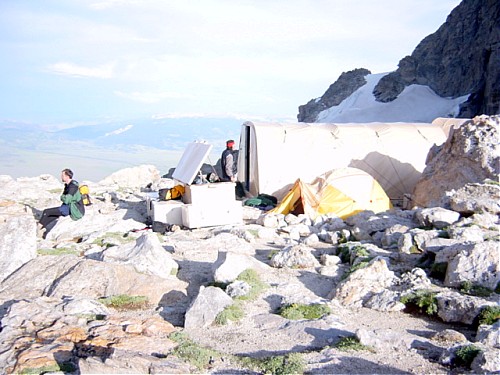 Camp at the lower saddle

As we step into the hut, the rain picks up and becomes a full-on deluge, including hail. The guide staying in the hut is Tom Parker, 60-ish, a writer. He relates to us

Disaster story #3: yesterday's group of climbers was hit by a major thunderstorm while near the summit. The rain came down harder than ever seen before. Rivers of water and rock poured down gullies. Trickles became Yosemite-sized waterfalls. The climbers were stuck at the belay ledge, knee-deep in water, clipped in to a rope, unable to go up or down, with lightning hitting around them, four strikes within 100'. Finally the rain stopped and they made it down to the hut, cold and terrified.

We climb into our Marmot tent (the main hut is to be occupied by the teenagers) and rest. 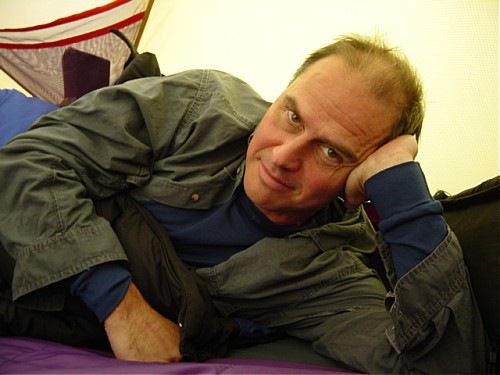 Ron in the tent
The sun comes out and we sit outside. Miles comes over and goes over our route for the next day. We eat our meager ration of freeze-dried chicken with rice, and retire. The guides sleep outside, tentless - another Exum tradition. 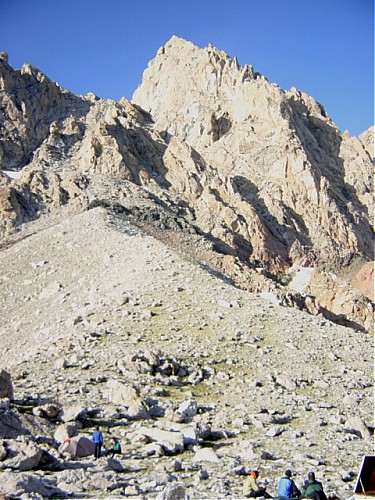 View of summit from lower saddle. Route: along ridge of rubble slope, past black dyke, left of The Needle, then to upper saddle. To the left (out of frame) is a secondary peak called The Enclosure.

Miles rousts us at 3 AM (I haven't slept). We have instant oatmeal and Chai tea. The stars are out. We don helmets and headlamps and start up the rubble slope. We look back and see the teenagers starting, their headlamps like a string of fireflies. As we climb the sky starts to lighten. It has clouded over, but as the sun starts to rise the upper clouds burn off, revealing a magical cloud-shrouded landscape. 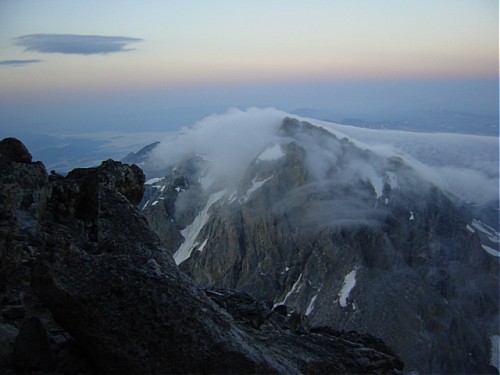 The Middle Teton, pre-dawn
We reach the top of the rubble slope and cross a band of black rock. From this point it's all rock. Miles pauses to get his bearings - the recent storm rearranged a lot of rocks (and we're talking large, heavy rocks; must have been the mother of all storms). We go up the gully left of the Needle, do a short belayed pitch, zig-zag once, and we're at the upper saddle as the sun comes up. We're on the shaded side of the peak; it casts a giant shadow into Idaho behind us. 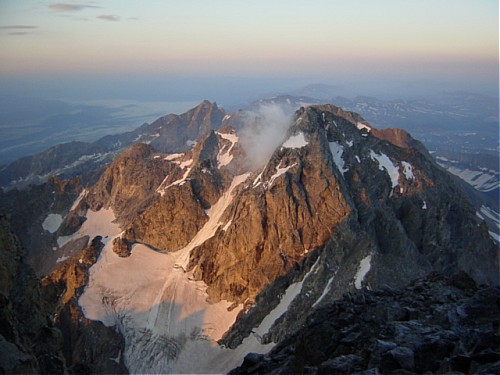 The Middle Teton, post-dawn, from the upper saddle. Note large glacier. Our guide had skiied from the summit 3 weeks prior. 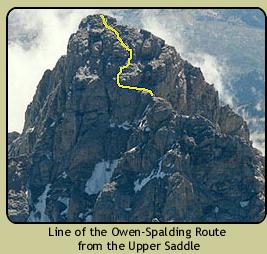 Second part of the route. On the descent, instead of jogging to the left, you rappel left of the black gully.
We traverse left. There's a short exposed section called The Belly Scratcher: a narrow ledge above a thousand-foot cliff. The edge of the cliff provides a good handhold. The easy way is to grab this edge, walk your feet down onto the cliff face, pull back, and move sideways. The hard way is to shimmy on your belly along the ledge. Ron chooses the hard way, but makes it work. (This section is belayed, by the way).

Then there's some 4th-class scrambling mixed with a number of belayed sections, some of them with names, like 'the Exum chimney'. The rock is heavily featured - there's always a hold when you need one. The main thing is to avoid wet or icy sections. 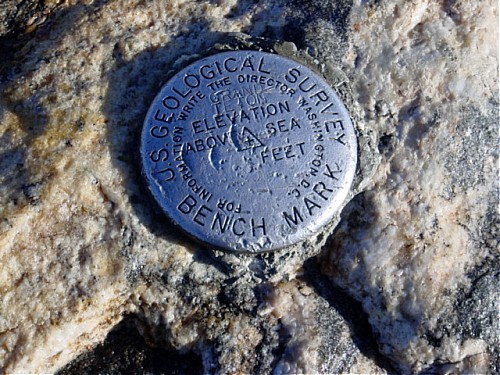 Proof that we were there 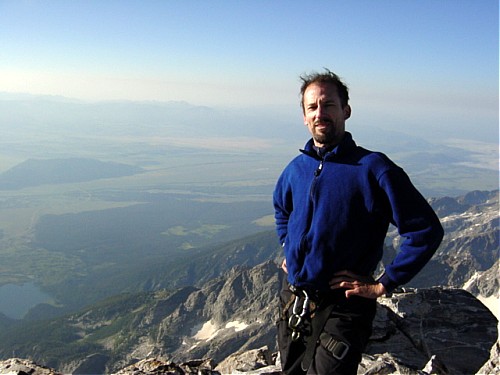 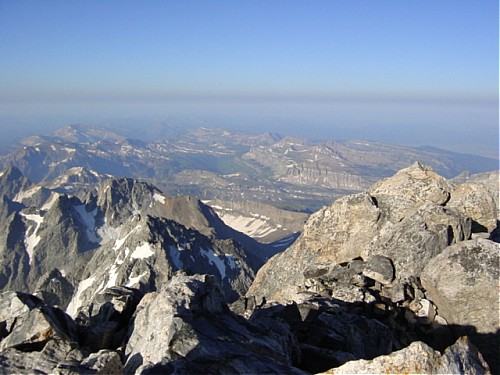 My own private Idaho 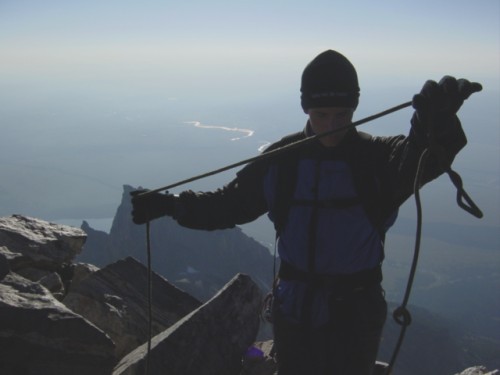 Miles makes the rope tidy; Mt. Teewinot and the Snake River behind him 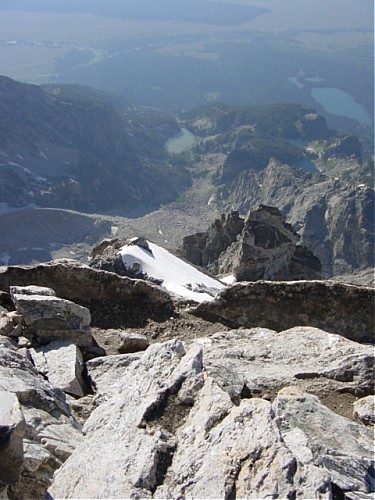 Down towards Lupine lake. Note small glacial lake. I believe the trailhead parking lot is visible at upper left. 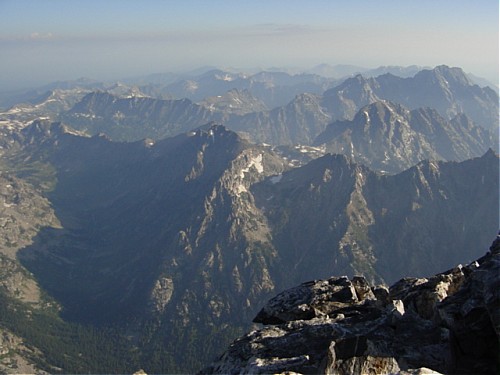 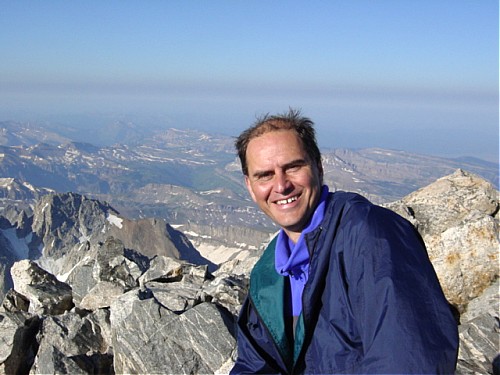 Another beautiful day on the mountain 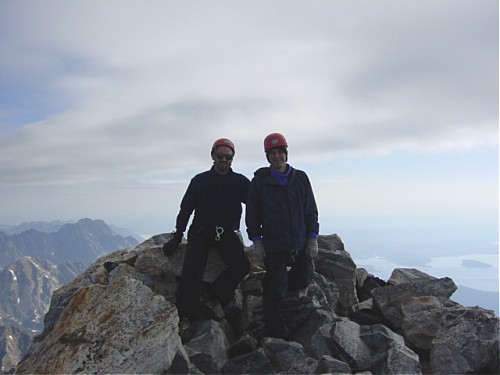 Helmets on, ready to descend
The descent features a 100' rappel down a heavily featured cliff, which makes it difficult to keep your balance. I bang against the rock a couple of times. (Note: I keep both hands behind me. This is wrong. Keeping non-brake hand on rope above would simplify balance and reduce stress on abs). 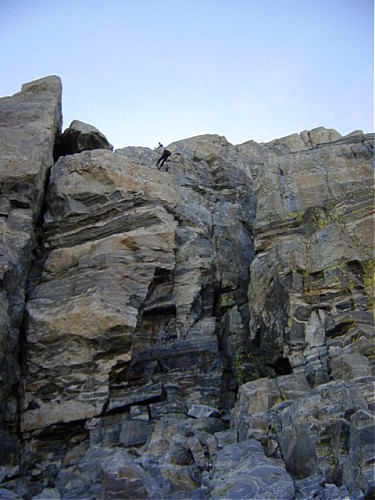 Losing my balance on rappel

We reach the lower saddle around 11:30, loll around while Miles cleans up the hut, and eat some Dal (which makes Miles want to gag - he was in Pakistan and was sick of Dal).

At 12:30 or so we pack up and head down. This is the hardest part for me - it's long and steep, I didn't bring my trekking poles so there's stress on my knees and lower back. Miles sets a blistering pace. We take a rest stop at the halfway point and decide to make a push for the cars. Once it's flatter I can go fast, and to make the time pass I chat with Miles about all sorts of stuff relating to sports.

We reach the car around 4 PM, tired but immensely satisfied. We say goodbye to Miles, and drive back via Jackson. We're hungry and want giant steaks, but Bubba's is too gross and everything else is closed so we just keep on driving and eventually get back to West, and some of Bobbi's delicious cooking, around 7 PM.

I had a little nerve-pain in the ball of my right foot from stepping on sharp rocks; the approach shoes offer little rigidity. On the descent I had some minor knee and back twinges. Ron had sore knees. I think I was dehydrated; we tried hiking the next day and I felt lethargic and crappy.

The guides are an intense bunch. They're all world-class athletes in multiple outdoor sports - rock-climbing, ski mountaineering, downhill skiing, mountain biking. Generally they've done several things as hard or harder than climbing Mt. Everest. But they avoid talking about themselves to clients. They're obsessive about exercise, e.g. biking 30 miles to and from work, where work is a Grand ascent. They have reverential respect for the traditions and ethics of climbing, and for the mountains themselves.

According to Miles, an Exum guide climbed the Grand, parking lot to summit and back, in two hours. This is almost beyond belief. The same guy descended from the summit to the lower saddle in 12 minutes. That could only be done by leaping rock-to-rock, bighorn-sheep style, down steep exposed pitches that would normally be downclimbed with belay.