All pictures except one by Eric Enderton

Eric E. had some vacation days and wanted to get out of town, so we decided to head to Tuolumne Meadows for some day hikes. We drove up on Sunday night and stayed in the Groveland Motel (NOTE TO SELF - NOT RECOMMENDED). I didn't sleep because it was cold and blankets were insufficient.

Monday we drove into the park. We pulled off the road just past Tenaya Lake and climbed a granite dome via its left shoulder, with a couple of 4th-class moves near the top, and descending the smooth slope on the far side. This is HIGHLY RECOMMENDED for a nice 1-hour hike. 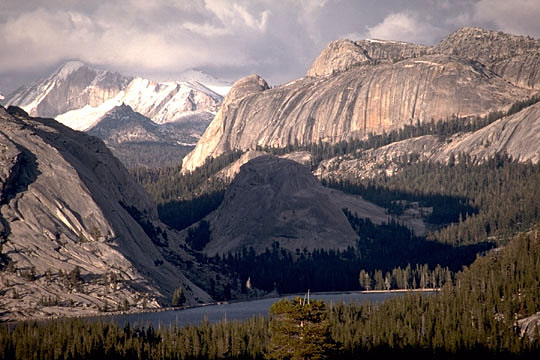 Lake Tenaya and the dome we climbed. Mt. Conness looms in the back left. This picture stolen from the web. 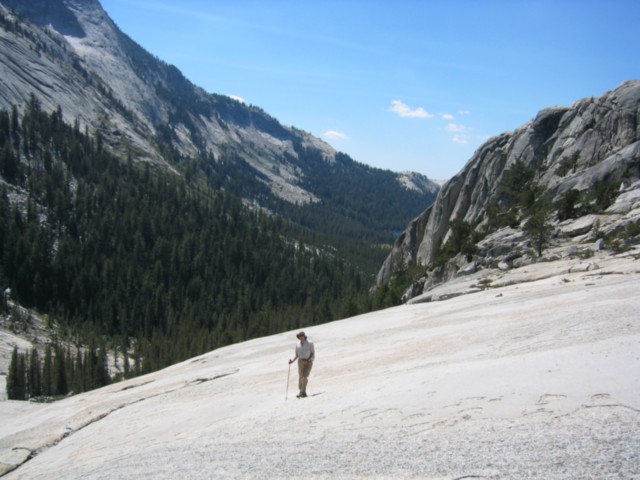 Glacial polish on back of dome 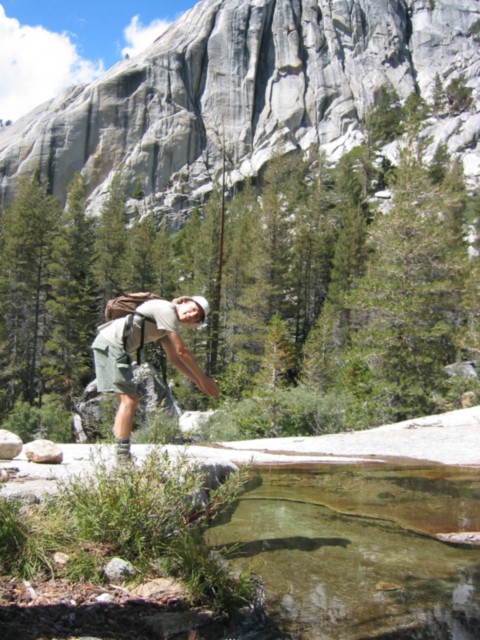 Then we continued to Tioga Lake and walked up to the start of the valley leading to the Dana glacier, then lay down and took a nap. 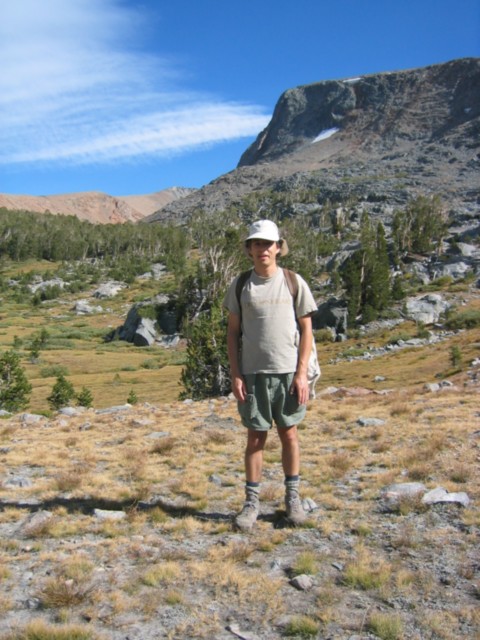 Eric in Dana Canyon
Then we continued on down to Lee Vining, inspected the Mono Lake campsites, and elected to stay in the Motel (the Gateway: recommended) instead. We made the mistake of eating at Nicely's (long wait, bad food).

The next day we climbed Mt. Conness, starting from the walk-in campground. A woman there said she hoped we didn't get blown off the mountain - it had been windy up there. I said that was OK as long as no lightning or snow. She said 'Oh, they get lots of those too'. Thanks, Little Miss Sunshine! 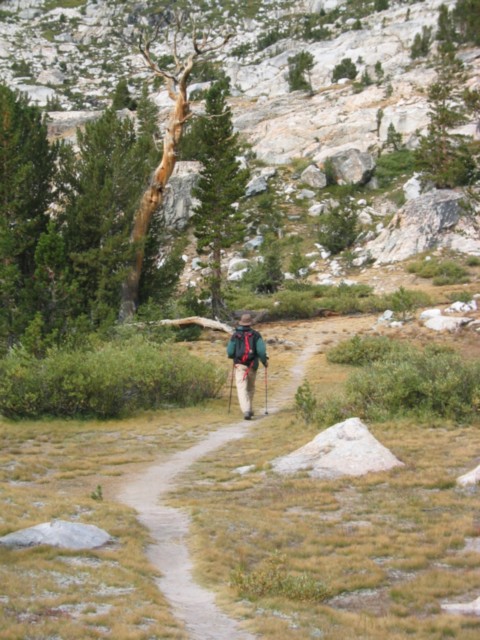 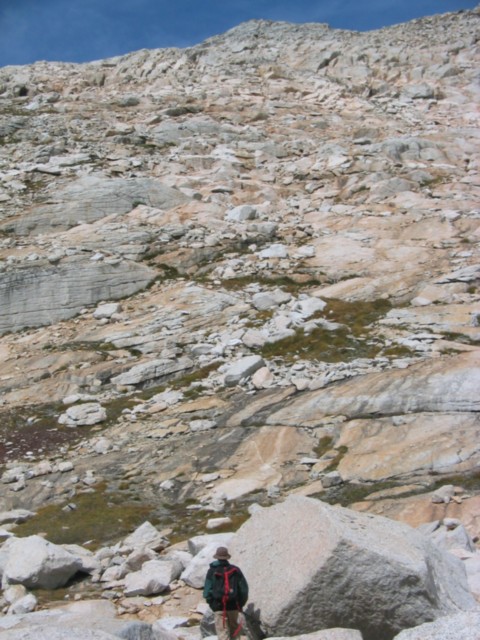 The daunting slope above Alpine lake 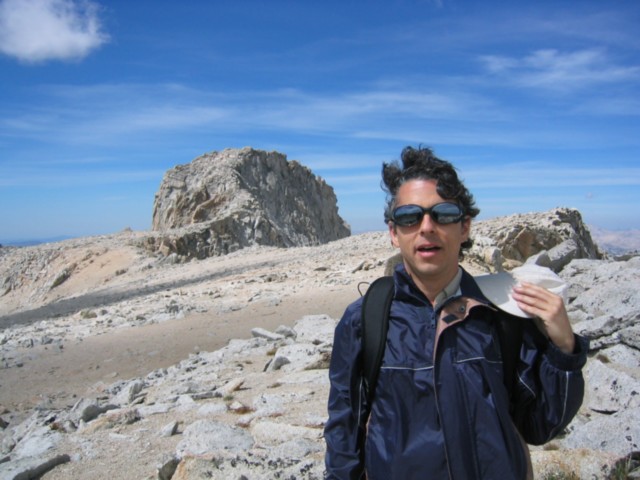 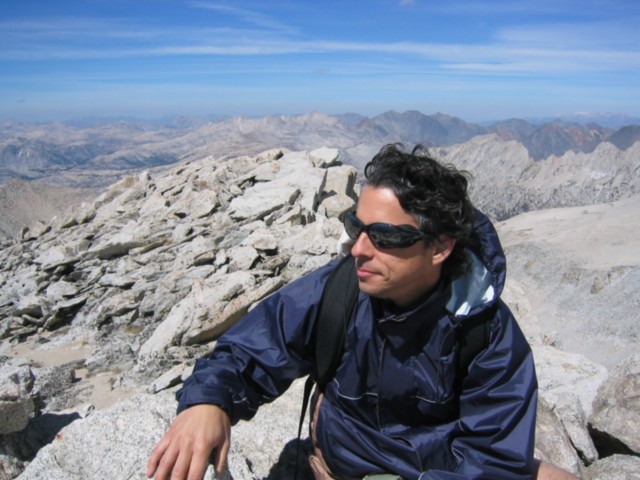 Anyway, it was cool and breezy but comfortable as we ascended, and remarkably calm on the summit. Eric climbed like Reinhold Messner, and things were made easy by my very precise route-finding: I realized that the path from the main trail to the notch lies along the axis from the false peak to Mt. Dana, so for the first time ever I was able to pick up the trail on the descent. Eric had a bit of anxiety going across the arete, but was fine coming back.

It was extremely enjoyable and easy - almost too easy, nothing unexpected happened.

Back in the parking lot, we encountered a gregarious guy from L.A., on his way to Reno, who wanted to do some kind of hike, and told us stories about his encounters with computers.

We met Erica in the parking lot of the store around 5:30 and drove to the main Mono campsite. It was marred by broken glass. We had dinner and made a fire. I think a bullet went off in the embers. An owl buzzed us.

Eric and Erica slept very poorly. We had breakfast at Nicely's (OK), drove to Tenaya Lake, and started on the trail towards Cloud's Rest. We thought it was ~3 miles but it turned out to be 7.1 with a lot of vertical, so we turned off towards Sunrise Lake, which was extremely nice and had a great view of Mt. Hoffman across the valley. Eric and I did some low-angle slabbing. 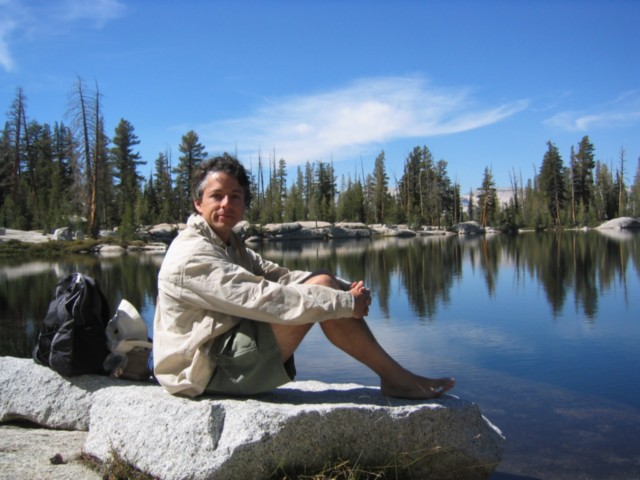 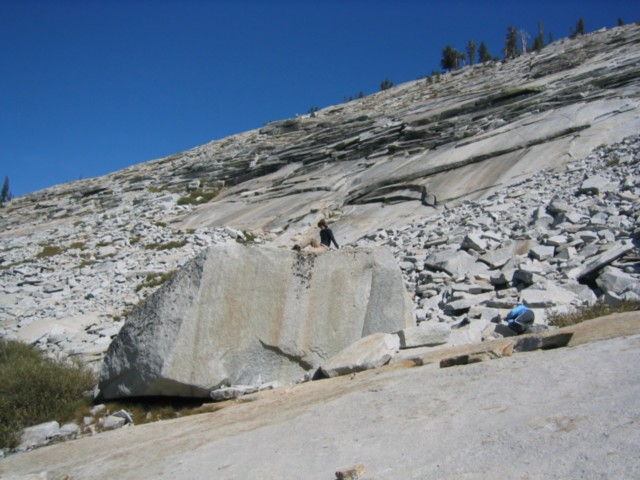 Me on a fairly large boulder 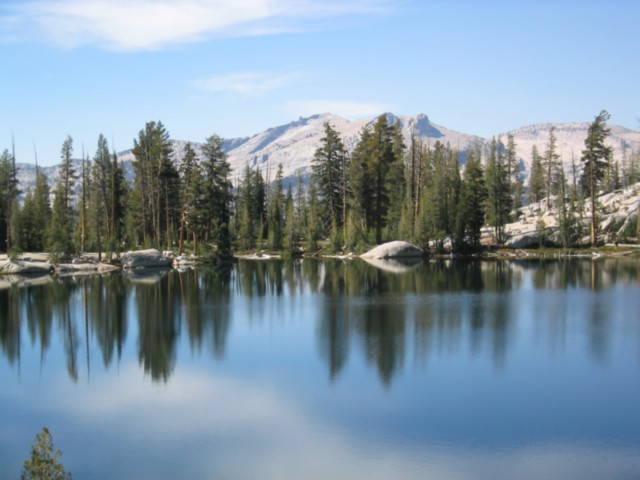 We drove out highway 140 and stayed in a 'suite' at the Cedar Lodge ($110, very good). We used the jacuzzi. There were a lot of chainsaw-sculpted bears, including one in an oddly suggestive pose. 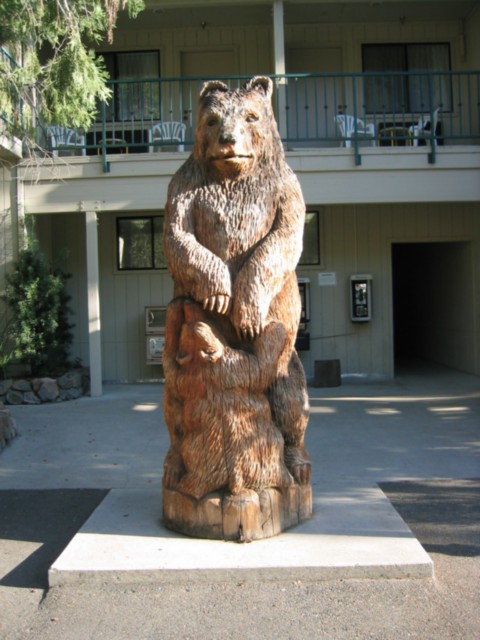 We didn't know quite what to make of this 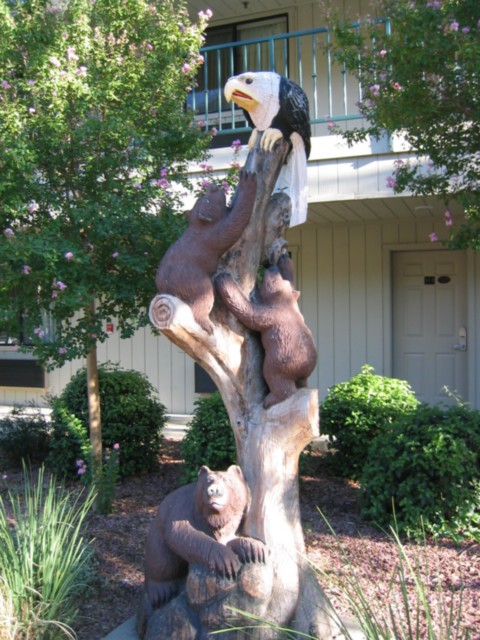 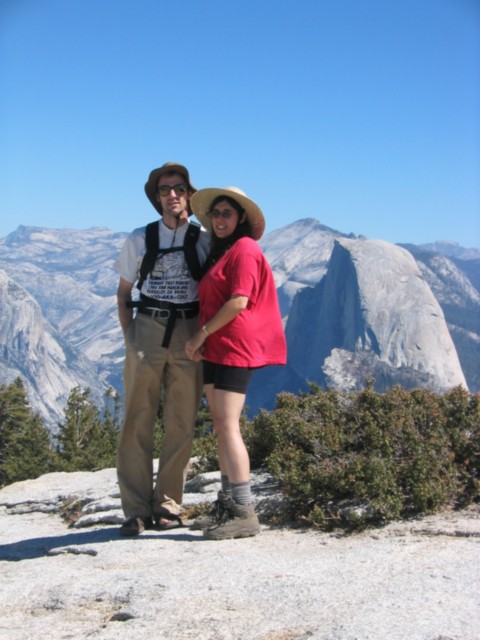 On top of sentinel dome 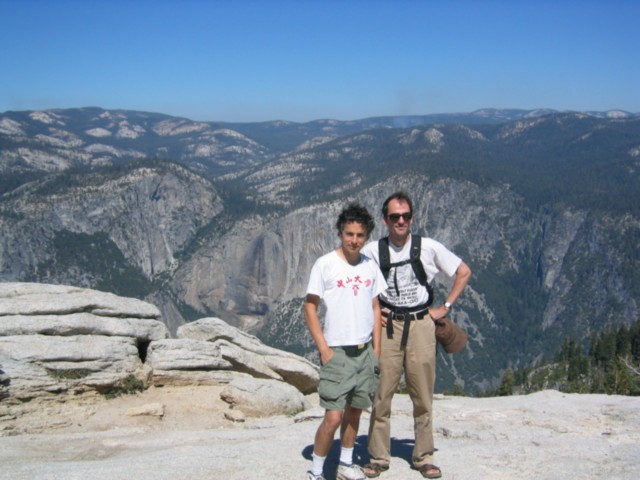 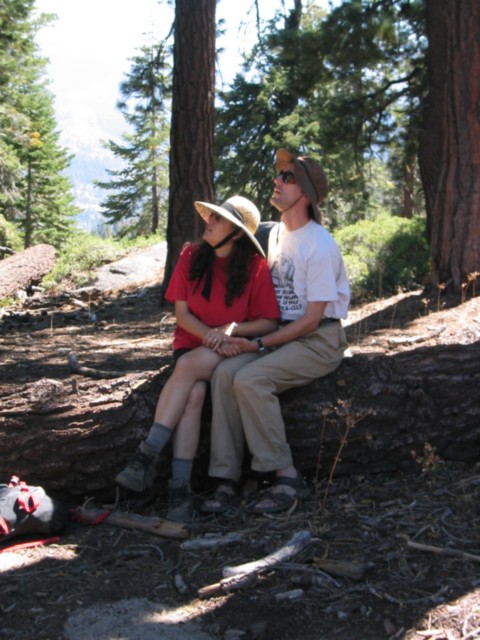 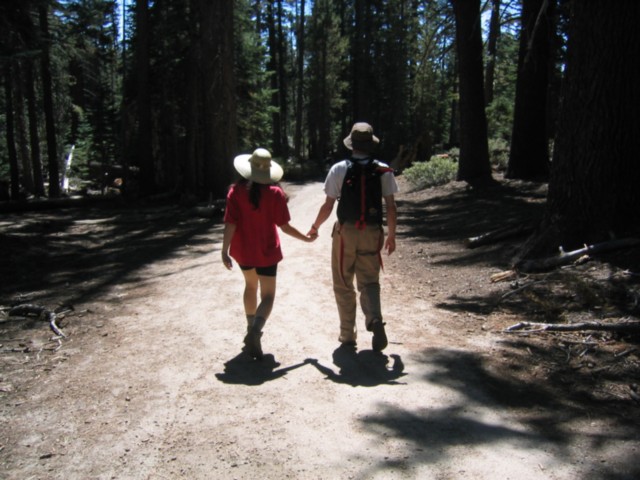 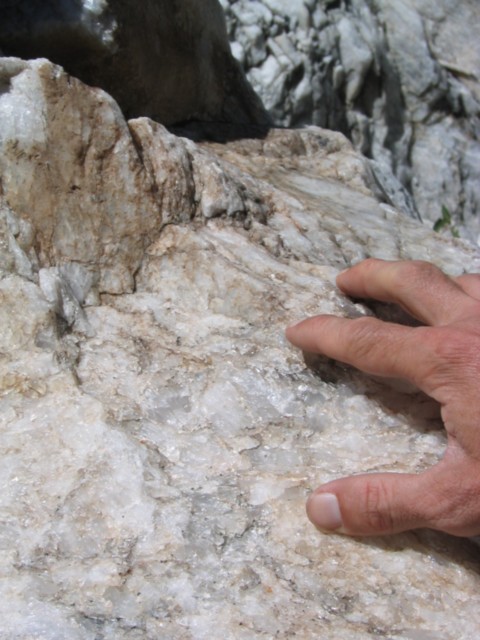 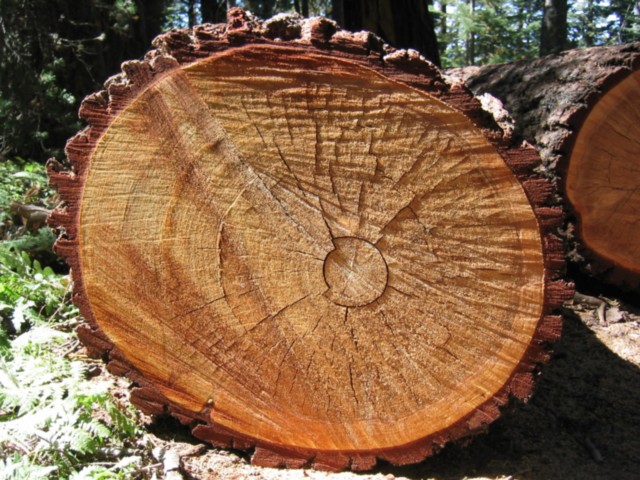 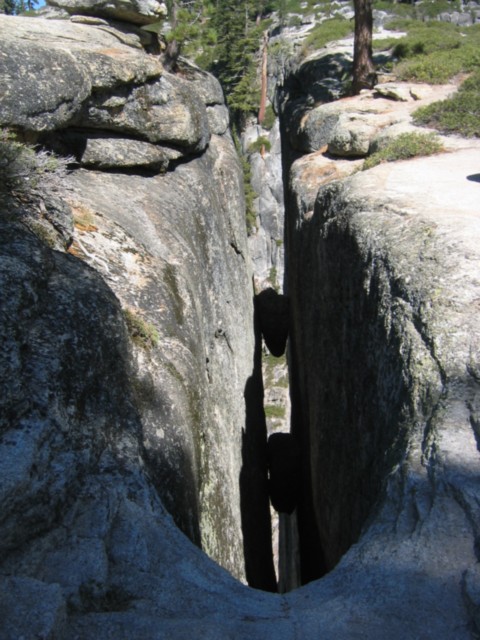 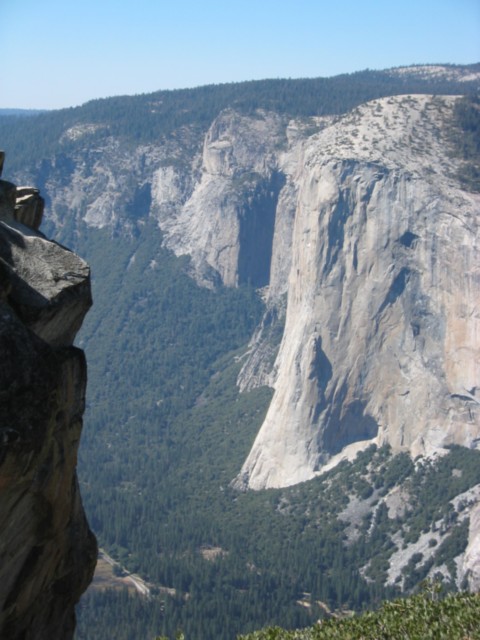 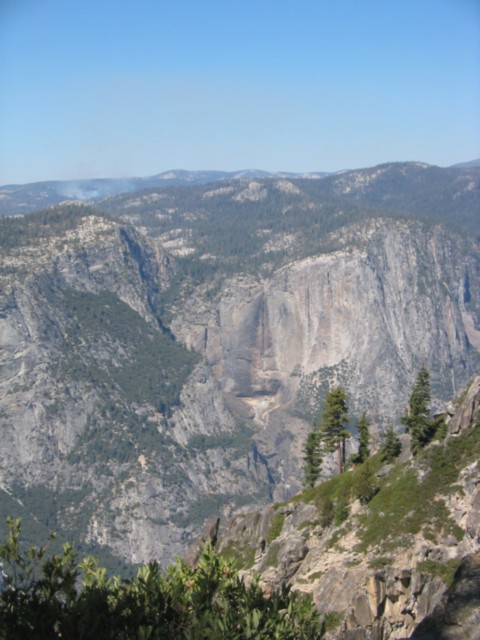 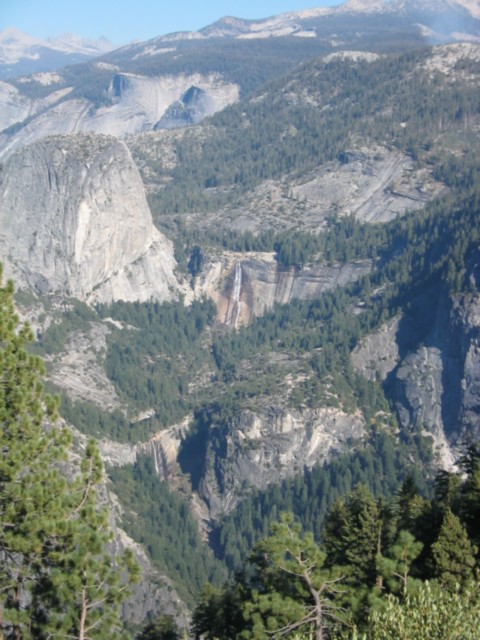 On the way back we stopped in Merced for dinner, which has almost no restaurants. A desultory street fair was in progress. We ate in Trevino's, a generic Mexican place that was OK. Erica took a shift driving and there were some issues that I won't go into here.