Yosemite valley is not that far from Berkeley. It's possible to drive there, do a full day of climbing, and drive back. Case in point: I got up at 5:45 AM and picked up Hamid in Castro Valley at 6:30. We were in Yosemite Village at 10:15, and on the rock soon thereafter. The sun quickly warmed things up to T-shirt temperature, and it was a glorious day.

Then we went to Bishop's terrace but there was a group there, so we did Church Bowl Tree, a 5.10B route referred to in the guidebook as 'the greasiest route in the valley', because it went up a white quartz dike, and solid quartz is way more slippery than granite. Speaking of which, I quickly realized that Yosemite granite is itself far more slippery than Joshua Tree granite.

Hamid did all the leading, and set totally bomber protection. He also showed me the basics of crack climbing, including finger locks, and also a principle of diagonal opposition that increases the weight, and therefore the friction, on a foothold.

For our last climb we drove down to Cookie Cliff and, with some difficulty, located Catchy, a 5.9 that Hamid had done before. It was harder than it looked. About 40' up there was a stretch that was hard to protect, and a fall would have brought him down onto a ledge. So we wisely gave up and headed home.

We stopped at a Mexican place in a small town on highway 140. It was bad in every respect, and Hamid had a stomach ache the rest of the way. We got back around 8:30, giving Hamid plenty of time to study for a final exam the next day. 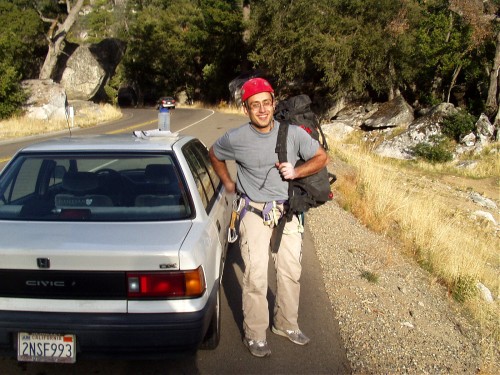