10 AM: Noah and I meet Tara/Chris/kids at Farmer Joe's near 580, with a slight glitch because there are in fact two Farmer Joe's. Their SUV is overflowing, and we transfer a camp table from their roof to our trunk. We got ourselves a convoy!

We make good time, and stop at the Oakdale Save Mart, where we shop with ruthless efficiency. Then we stop briefly at the Crane Flats gas station, where the kids break the ice with some wrestling, and also at Olmstead Point. At 3:30 we arrive at Puppy Dome. I set up a top-rope anchor while the others check out the great swimming hole behind the dome. The bolts near the small trees have been clipped, but there's a pair of bolts at the left, solid albeit without backup.

I fetch Noah and we hike up to the belay ledge. The route is about 35' high. It's 5.6 slab, meaning that it has no obvious holds of any sort, and seems impossible if you're trying it for the first time. However, Noah eagerly jumps on, quickly gets the hang of it, and makes it to the top with only a small amount of rope assist. I lower him, and he immediately does it again, a bit more smoothly. He's completely unintimidated by the outdoor setting. He asks to do it again, but I refuse and tell him to stay put and not die while I get Tara. Tara belays me, then I belay her. She slips near the start, falling about 3' and scraping her leg. Noah does one more lap with Tara belaying, then it's time to go.

We drive over Tioga Pass and down the immense canyon to Lee Vining. Tara's SUV has brake problems, which get resolved. We drive on 120 to the cinder cones. The area where I traditionally camp was burned 2 years ago, and hasn't recovered: there are still only skeletons of large sagebrushes, and a few small ones starting to grow. It will take many more years.

However, the area on the other side of 120 is untouched, and there's an inviting road. After 400 yards we find an ideal camping site. I stop, while Tara continues, hoping to find a lakeside site. Time passes. I get in the car and follow her. Noah wisely points out that this is a recipe for disaster, and we return to the first site. Soon Tara returns unsuccessfully; the shore area is not level enough.

We set up camp, crack open some beers, and get dinner ready: rotisserie chicken, garlic bread, and corn/okra chili. The kids collect firewood, then rough-house in my tent, leading to a rift between Noah and Gia. 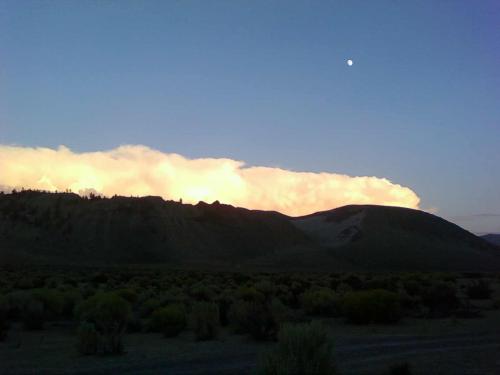 as well as the beautiful and wonderful-smelling sagebrush. I feel like I've returned home. Chris takes a 360 degree panorama shot using Photosynth as well as some conventional panoramas:

We make a sagebrush camp fire and the kids toast marshmallows. There's lightning in the distance. Coyotes howl nearby.

The night starts out warm but cools down into the 40s. I sleep pretty well on my 3" memory foam mattress.

The morning is warm and sunny. Chris makes pancakes and sausages while Tara sleeps in. Noah discovers dried-up "scat" (possibly deer or rabbit) all over the place, and he and Gloria go around collecting it. Noah, who has recently attended some nature-oriented summer camps, delivers a long lecture about scat to Gloria, and claims to identify bear, coyote, and snake tracks.

We drive across 120 and walk up a path on the nearer cinder cone. This path wraps around the back and doesn't go anywhere, so we scramble down a short slope and go down the sandy trail. Led by Glo (5), Noah and I take a short-cut through the burned area to the cars. We pass a pile of ancient rusted cans.

We drive down 120 to the Mono Lake South Tufa area, and do the loop. Tara and Gia swim briefly in the lake; Noah wades but finds the water too cold to swim. 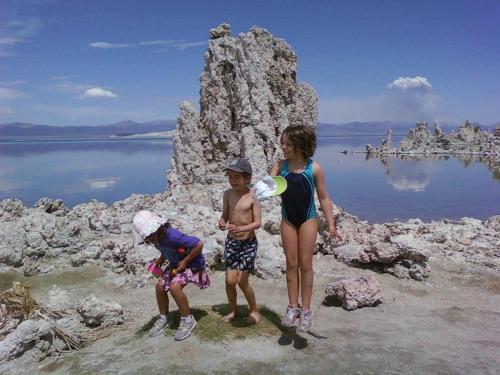 An attempt at jumping shot 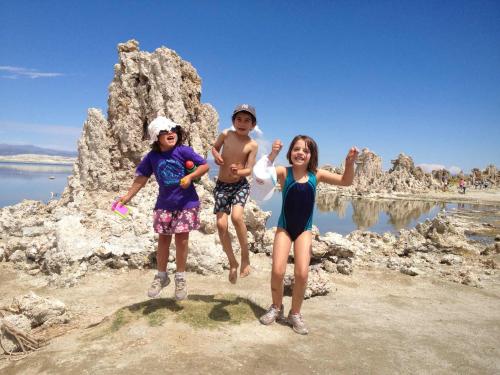 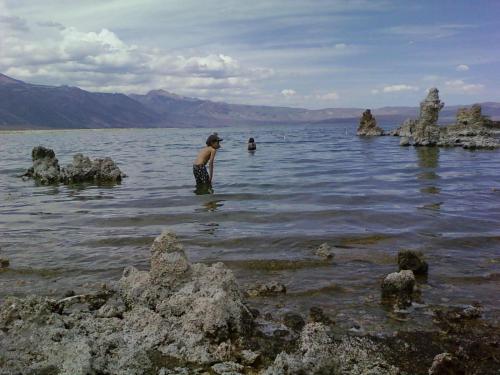 Toward the northeast, maybe 20 or 30 miles away, there's a huge column of smoke and cloud. This turns out to be a wildfire caused by last night's lightning; it threatens power lines so they're fighting the fire, dumping water on it, which creates the clouds. 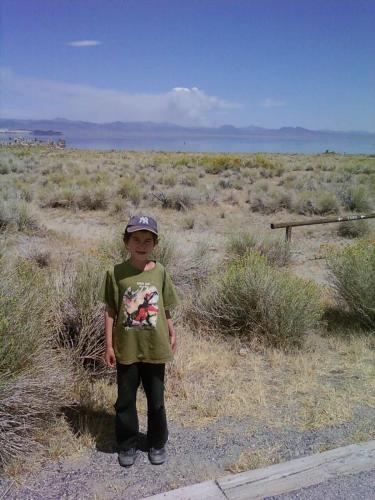 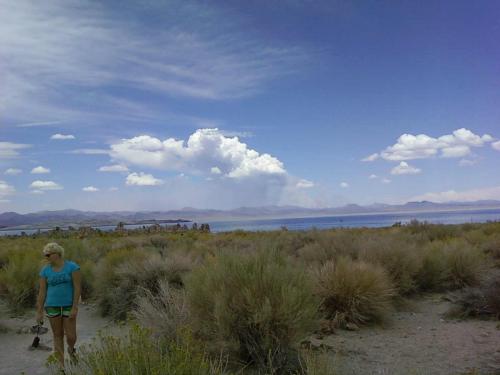 We learn that the road we're camped on goes past a large volcanic crater near the shore of the lake. We don't have time to visit it; maybe next time.

We drive to Lee Vining and have lunch at Mono Cone; Noah has a corn dog and Tara shares her root beer float with him. Noah and Glo do a little wrestling. We get food and ice at Mono Market. 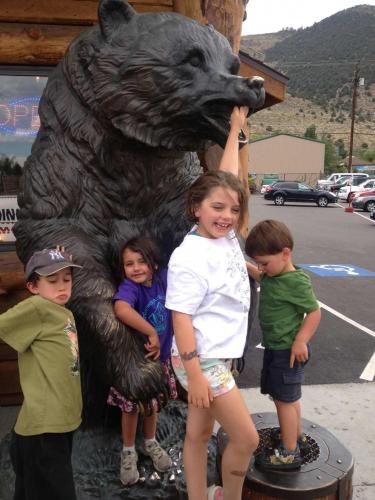 Chris has brought fishing gear, so we drive to June Lake and, after some exploration, find a nice spot on the far shore of a small secondary lake. Tara vainly tries to find a place to hang a hammock. Gia swims, and I climb a nearby hill. The kids do some fly-casting but no fish are caught.

At 4:45 we decide to do one more adventure, namely Hot Creek. This triggers a small tantrum from Noah, who wants to return to camp, but Tara mollifies him with the offer of a movie on her iPad. Noah accepts, but it quickly makes him car-sick.

We drive past Mammoth to Hot Creek. Unfortunately there have been some fatalities there due to rogue geysers of boiling water, and it's fenced off and closed for swimming. 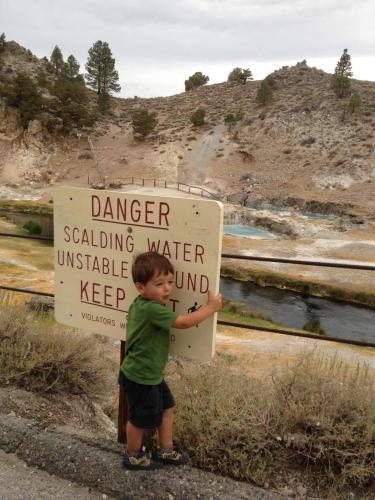 We toy with the idea of going in anyway, but decide against it. On the way back to 395 we see three deer in the sagebrush.

We return to camp and make a gigantic dinner of penne pasta with sauce, topped with your choice of chicken-apple sausage, left-over rotisserie chicken, zucchini, and grated parmesan. I take the leftovers; they'll feed me for several days back home.

Another camp fire, more marshmallows. When it gets dark I notice a red glow on the horizon. It's the distant fire, still burning, lighting the clouds. There are repeated lightning strikes near the fire. Noah is fascinated, and we move our chairs to a dark area where we can watch.

The wind picks up. As we get into our tents, it starts blowing big time. Chris/Tara's tent (a high dome) is knocked over; Chris works to stabilize it. My tent is blown around even with me and Noah inside it. Then the wind abruptly dies away.

I sleep extremely well, having added a Thermarest pad under my memory foam.

Tara makes a big pot of oatmeal and raisins. We break camp and say goodbye (a bit sadly, but with the promise of future trips). Noah and I set off for Mt. Hoffman. We stop at the Mobil station to toss garbage and get coffee, then drive to the May Lake trailhead, arriving at 11 AM.

We walk the 1.2 miles (500' vertical) to May Lake. Noah starts off slowly, and the brightness of the sun bothers him a bit. But he picks up steam, and announces that his energy is good. We enjoy the increasingly magnificent view of Tuolumne Meadows, including Mt. Conness, Dana, Gibbs, Cathedral Peak, Cloud's Rest, and Half Dome down in the valley.

We stop briefly at the lake and Noah eats a Clif bar. We look up at Mt. Hoffman, and intimidating wall of rock looming 1,600' over us (actually the summit itself is not visible). We circle the lake to the left, making a stop at my favorite Ponderosa pine and sniffing it (the butterscotch aroma is present but faint). We hike up the Amazingly Beautiful Canyon, and pass through the Land of Magic Rocks: orange-red granite, snow-white quartz, and the mysterious green/black striped rock. We pick up samples for my rock collection.

Soon we're on the broad, steep ridge that leads to the summit plateau. The trail is faint but well-marked with cairns. Noah goes first and I show him how to follow the cairns, which he picks up quickly. He reports slight altitude symptoms: nausea, headache, and fast pulse. We slow down a bit and stop for water, and he feels better. He chatters incessantly about various mountain-related topics.

Noah is a small climbing machine, an Energizer bunny. The trail is mostly large rocks, which are big steps for me and full-body climbing moves for Noah. I repeatedly suggest that we turn around, but Noah will have no part of it. He says he's determined to make it to the summit.

The weather is variable - mostly clear overhead, but with some large clouds blowing in. In the distance there are larger dark clouds. Occasionally we hear distant rolling thunder. We see several marmots, including a pair of juveniles.

At 2 PM we reach the base of the summit block. I decide to turn around, due to the iffy weather, the somewhat late time, and the difficult and slightly dangerous nature of the summit block. Noah's disappointment is offset by the fact that there's snow in the north-facing crack, which we climb down to and briefly play with.

The way down is harder because Noah slips a lot on the sand-covered rocks. I hold his hand a lot of the time. We meet and chat with about 10 other climbers. As we approach the lake it sprinkles a little.

We go to the dining hall of the tent-camping area at May Lake. I recognize the guy working there from last year. They don't have any pie, but there's chocolate cake (free after 4 PM). We buy 2 cups of lemonade and set a spell.

The sun is out again and we walk back to the car, arriving at 4:30. Noah says he's really enjoying the hike, and wants to make plans to climb Half Dome, with a few ascents of Mt. Diablo to get in shape. Actually, he wants to drive directly to Half Dome and start hiking, but I veto this idea.

We chat with a pair of hikers from Indiana. They mistakenly parked at a trailhead about 2 miles away, so we shuffle stuff in the car and give them a ride there.

During the descent the air has become hazy, and at the bottom there's a strong smell of wood smoke. As we drive west the smoke gets thicker. We stop at the Crane Flats gas station. There's a very light fall of ash, like small snowflakes. I overhear people talking about possible evacuation of Berkeley Camp on 120, so I realize the fire is not a controlled burn. Sure enough, at the junction a sign says that 120 West is closed due to fire. Damn - so much for getting back by 9. We detour south to 140.

There are delays at the park entrance and the rock-slide area. This, coupled with the irritation of driving 40 in a 55 zone with no passing, puts me in an impatient mood. We get to Modesto and of course the on-ramp to 99 is closed, requiring a detour through the center of town. We stop at In-and-Out Burger, which hits the spot.

It's nighttime now. The rest of the drive goes smoothly enough, but I experience ever-increasing road rage due to people driving in the left lanes even when they're not passing. I'm tempted to pull up right behind them and flash my brights. I settle for passing them on the right and honking.

Most kids would probably go to sleep - not Noah. We pass the time listening to loud music (Hendrix, Allman Brother Band), talking, and listening to baseball on the radio (the Giants are getting trounced by the Red Sox, and Noah makes me turn it off). We pull into Berkeley at 10:30, and I drop off Noah.

I dislike hyperbole, but it's possible that these were the best 3 days of my life so far. Noah's passionate embrace of mountain-climbing is a dream come true, and is quite a change from his behavior during last year's debacle.
Copyright 2022 © David P. Anderson